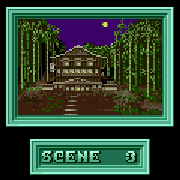 Lamp (Toughness: 3) - Travels slowly and diagonally in mid-air. The lamp itself is not difficult to avoid. It releases light bulbs which also travel diagonally, but they are fast and dangerous. A new light bulb is always shot initially towards the upper left. It is easier to evade light bulbs in a large, open room than in a small, confined area.

Toaster (Toughness: 3) - Medium speed, but often easy to hit. Releases toast which sometimes moves in tricky patterns. Sometimes it releases a piece of toast through the ceiling.

Chair (Toughness: 4) - Appears in the maze, and are very dangerous. Avoid making them appear, or leave them confined, or move quickly away. 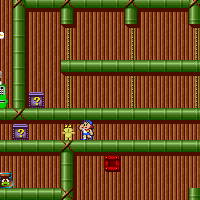 Near the third telephone booth, there is a narrow passage with a light switch. (Only a small-sized Esper can enter this passage.) The Secret Bonus is in the 3rd ? box (the one just before the Magic Jar) in that passage. Be careful not to hit it by mistake in the darkness.

This Secret Bonus is especially important, since it is the key to getting Genzoh in scene 3. There are few items around, so score adjustment is mainly done with the enemies. 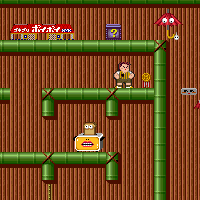 It's on the uppermost floor in the area with the heavy doors. 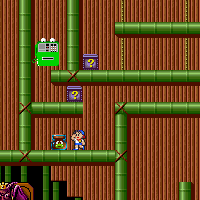 After getting the Secret Bonus, walk on and you'll fall through a fake floor. The Magic Jar is there. If you don't have Makoto or Bunta, you'll get him. If you already have both Bunta and Makoto and you've also just got the Secret Bonus in scene 3, you'll get Genzoh. Otherwise, you'll find a Magical Bonus.

In scene 3, there are dangerous enemies, and there is puzzling terrain. In many areas, getting the food can be quite dangerous for the beginner. 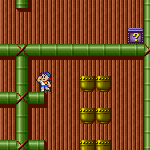 The starting room can be quite dangerous, regardless of which Esper one uses, if one tries to get the food, unless one knows the 'magic spot'. Do not try to fight the lamp; it's easily banished by moving to the left side of the room. If the public card phone appears, you can banish it (as well as certain other public card phones) by standing at the upper left corner of the room. Makoto can reach this spot most easily, though he may be a bit unwieldy inside the maze due to his large size.

Exploring the maze is interesting, so I'm leaving it to the reader. Here's a hint: enemies appear only in the rightmost and leftmost columns of cells, so be careful when opening those. Also, if you need to pass through a cell in which a public card phone appears, it is safer to let it move away than to destroy it, especially if you have yet to destroy the fake walls on the other side.

In contrast to the right starting room, the room left of the maze is relatively safer, especially if the public card phone isn't appearing. If the card phone appears, you can banish it by climbing up to the 9-room area above and staying there for a few seconds. Leaving the top food pot gives you foothold and blocks the umbrella, allowing you to climb up easily and safely.

It is possible to clear the 9-room area above normally, but it is rather dangerous and time-consuming, so it is recommended that you use the broom. In the room below the 9-room area, stand on a high place, and dive down when Zara comes, and you should be able to hit her quite easily.

There are 4 Time UP items before the first ON gate; make good use of them. If possible, avoid getting too many at once, in case you die after getting them.

After the ON gate, there is a vertical area with several moving boxes. It seems that if you ride the broom through the ON gate, the public card phones on the ground won't appear; if they don't, the easiest way up is to jump onto the moving box just right of the red jewel, with the P power or Makoto. (Avoid going up through the leftmost hole unless the moving box over it is stopped.) Otherwise, it may be safer to climb from the right with Naoki. There are some hidden walls in the top right corner of the area. In the pit with 3 fires, the 2 on the right are false fires on a fake floor.

In the next area, there is a choice of 3 paths. You need to enter the narrow passage (with a kid) to get the Secret Bonus and the Magic jar, but the way onward is blocked by a public card phone. The two umbrellas make the direct path up with Makoto dangerous. The safest route, though time consuming, is through the heavy doors, with Bunta; there are also an Extra Bonus and a Time UP on the path, too. There are 2 fake floors you can break through to go up. (See the picture of the Extra Bonus.) A lamp blocks the exit; you can either clear it with the broom (since you're near the top of the scene), or you can retreat to banish the lamp, then quickly go through before it appears again. 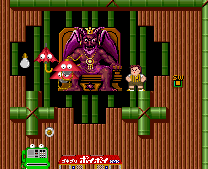 There are 4 ? boxes in Satan's room. If you have a Stop icon, you may consider using it here. (If you have Genzoh, you may want to save it for the start of scene 4 instead.)

If you have Genzoh, you can destroy Satan in just 3 hits. The fight would be very easy; just be careful about fireballs and light bulbs during the approach. If you don't, you can use Akiko or Naoki, or you can take a gamble with Bunta. (Genzoh and Bunta need to use the telephone booth as foothold to jump through the last ON gate.)

While the first 2 scenes can be pretty much handled by modulus counting, from scene 3 onwards it becomes rather difficult to get the All Gold Bonus without making good use of the break points. Using break points, scene 3 is not difficult at all. Being able to get the All Gold Bonus here may become important, for if one makes a mistake and fails to get Genzoh in scene 3, scene 3 All Gold Bonus alone will let one get Genzoh in scene 4, where having Genzoh against Satan makes some real difference.

Start with Naoki, for better jump and speed, and in anticipation of broom-riding. Experts may even try Makoto, though he dies easily if you make any mistakes. At the start, hammer once (at a fake wall if you want) and pick up the 2nd set of 3 tamago, then hammer once again, and pick up the 4th set of 5 ebi. (Leave 4 food pots intact.) Now, you're at a break point, with which you clear a path through the maze. (You don't have to clear the path all the way if there are enemies blocking the exit.) After clearing the path, return to the first room and pick up the remaining 4 food, then go through the maze (counting modulus 3 if you need to hammer) to the left room. Get the food here, but leave the top food pot (for foothold for easy climbing up) plus another one (to avoid pairing problems) if you're at the set of 16 ikura. Finish a set (you need to go up for more food pots if you're getting ikura) and stop at the break point, then return to the maze and deploy icons with the fake walls.

With the broom, finish one of the remaining 2 sets, then come back down again to deploy icons in the maze. (It doesn't matter if you pick up more food after finishing one set, since there's only one set left now.) Since now only one set is left, you're home with the All Gold Bonus.