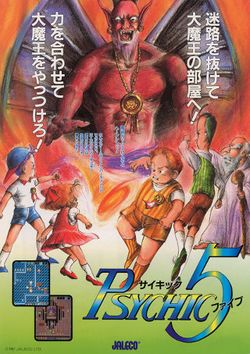 Psychic 5 is the third game developed by Nihon Maicom Kaihatsu (NMK) for Jaleco (after Argus and Valtric), and was released in 1987. While it did not have huge success, it nevertheless became a 'cult game' for many players thanks to the brilliant gameplay, hard-to-find secret bonuses and anime-like plot. The inspiration for the design of the five ESPers comes from several Japanese cartoons of the '70s where the physical aspect of main characters was strongly stereotyped to suit their psychological profile/fighting ability.

The game was never ported to any home system. However, portions of the gameplay, including the cast of characters, did serve as the basis for the Jaleco published Famicom game, Esper Boukentai.