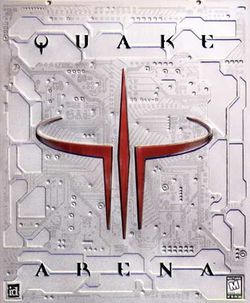 Quake III Arena or Quake 3, abbreviated as Q3A or Q3, is a multiplayer first-person shooter released on December 2, 1999. The game was developed by id Software and featured music composed by Sonic Mayhem and Front Line Assembly. Quake III Arena is the third in the series and differs from previous games in the series by excluding a traditional single-player element and focusing on multi-player action. The single-player is instead played against computer controlled bots in a similar style to Unreal Tournament.

Notable features of Quake 3 include the minimalist design, lacking rarely used items and features, the extensive customizability of player settings such as field of view, texture detail and enemy model, and advanced movement features such as strafe-jumping that give more speed with greater skill in contrast to the digital, all or nothing design of many computer games.

An expansion pack titled Quake III: Team Arena was released in December 2000 by id Software. It focused on team gameplay through new game modes and new weapons, items, and player models. Team Arena was, however, criticized as its additions were long overdue and had already been implemented by fan modifications. A few years later Quake III: Gold was released, including the original Quake III Arena and the Team Arena expansion packs bundled together.

On August 19, 2005, id Software released the complete source code for Quake III Arena under the GNU General Public License, as they have for most of their prior engines. This does not make the entire game GPL, the textures and other data were not released. A project called OpenArena addresses this issue, creating open content and bundling it with the engine as a standalone Quake 3 release. Open Arena uses the ioquake3 engine, which is focused on bug fixes, sound and graphical improvements.