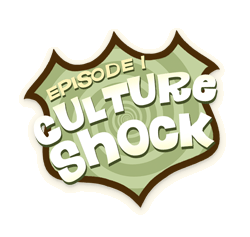 In Culture Shock, an ex-television star attempts to take over the world with a mass-hypnosis tape, starting with the child stars of the hit show The Soda Poppers, which replaced his own. Sam & Max have to de-hypnotize the three child stars to find the location of the Brady Culture and bring him down.

Before you can start solving any mysteries, or even become aware that a mystery is in progress, you must rescue your telephone from rodent-gangster Jimmy the Rat.

Once you have come up with the cheese, Jimmy reneges on his deal and you'll have to interrogate him with a "good cop, bad cop" method to convince him to return your property.

Now that you have your phone back, you'll receive a call from the Commissioner who reports multiple occurrences of oddness in your neighborhood. Sam suggests heading down to the convenience store. Before you leave, you may want to pick up any items from the office that you can take along with you in your inventory. Use the office door when you're ready to leave.

When you get down into the street, you'll find Bosco's at the end of the sidewalk to the right. When you get inside, you'll find that Bosco has an intruder he'd like you to take care of—Whizzer, one of the stars of The Soda Poppers.

Once Whizzer is knocked out, you'll get your first hint that the main culprit is watching you. There's nothing more to do in the store, so grab any inventory items you can find and head back out into the street. For info raising money for any purchases, see the DeSoto section.

Out in the street, if you didn't meet him already on your way to Bosco's, you'll find Specs, another Soda Popper with a penchant for painting. As he's another hypnosis victim of Brady Culture's, you'll want to knock him out as well.

Once Specs is down, you'll hear another voice-over from Culture. The only inventory item you can pick up in the street was used to knock out Specs, so you should already have it in your possessions and can take a drive to earn some money. Hop into your DeSoto and hit the road.

In the DeSoto you can move back and forth across the road and run into random motorists. You'll also be able to shoot your gun, shout on the megaphone, honk your horn or go back to the office. Since Max chewed through the brake lines, the only way to slow down is to rear-end another car.

When you have the dough, you can return to the office and you'll now be able to purchase something that costs $10,000.

Inside Sybil's, the last building down the street to the left, you'll find Peepers, another Soda Popper, who believes he's Sybil Pandemic, the shop's proprietor. Here you can knock out the last Soda Popper, before or after letting the real Sybil out of the closet.

When Peeper's is knocked out, Sybil will deprogram him, which teaches Sam how to do the same. Now you just need to go help the rest of the Soda Poppers you've already knocked out, by going and talking to them. You can wake up the others in any order, however, whichever one is last will jump into the van and drive away, leaving you to follow them in the DeSoto.

While following the Soda Popper in the van, you'll need to dodge the boxes of Eye-Bo tapes that come flying out the back. Hitting them or any of the stuff on the sidewalks will slow you down. When you get close enough to the van, shoot out its back tire with the gun. The only thing you can do at Brady Culture's "Home" for Former Child Stars is grab the one inventory item and head back to the office.

You'll need your admission form filled out by a licensed professional diagnosing you with APD, and Sybil is the only one on your street. She is grateful to your for getting rid of Peepers, so she's happy to perform your psychoanalysis. You'll need convince her you have the three symptoms of the disorder:

Now that you have all three symptoms, Sybil will sign off on your chart showing you have APD, which allows you to get into Culture's theater.

Take the DeSoto back to the theater and use your filled out admissions form at the ticket booth's form reader to open the gate, allowing you entrance. Inside you'll find Brady Culture, but unfortunately you don't have any protection against Culture's hypnosis ray. You'll find that you are now a video deliveryman for Culture, bringing tapes into Bosco's Inconvenience by the crateful.

Now that you are back to your normal self once again, you'll need to find some protection against Culture's hypnosis ray before confronting him again.

With your anti-hypnosis helmet, you're once again ready to face Culture. Take the DeSoto back to the theater and go back inside. This time your helmet protects you from the hypnosis ray. Unfortunately, the Soda Poppers arrive to back you up, but they don't have any protection against hypnosis. Culture has them attack you, and you'll need to use a little reverse psychology on Culture to take him out.

Once the Soda Poppers take out Culture, you can crush his hypnosis glasses and de-hypnotize the child stars. That completes your adventure for Episode 1.