Sam & Max Save the World

From StrategyWiki, the video game walkthrough and strategy guide wiki
Jump to navigation Jump to search
Sam & Max Save the World | Table of Contents | Gameplay | Walkthrough 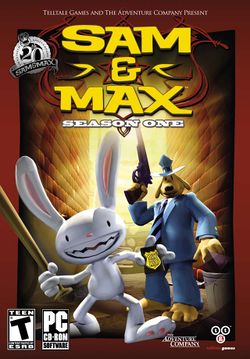 Sam & Max Save the World (originally released for Windows as Sam & Max Season One) is a compilation of the first season of the Sam & Max series of episodic adventure games developed by Telltale Games. The Season One package was first released on Steam and later for Windows. In 2008, Telltale Games confirmed the game was being ported to the Wii for release in October 2008.

Each of the six episodes has its own self-contained plot, but a central story arc runs throughout the season. The collection includes additional videos and behind-the-scenes bonuses.