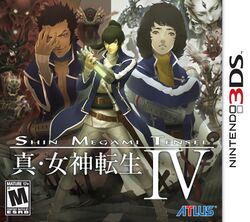 The first trailer for the game was included with the Japanese 3DS release of Shin Megami Tensei: Devil Summoner: Soul Hackers on August 30, 2012. A second trailer was released on September 17, 2012, with an extended version shown at the Tokyo Game Show and later released to the public. The game is the first in the main series to have full voice acting.

The game starts out in the country of East Mikado, a seemingly medieval country with strong social stratification, with the populace widely divided into two groups, the nobility who are known as Luxurors, and the peasants who are known as Casualries.

The protagonist Flynn attends the "Ceremony of the Gauntlet" in East Mikado to become samurai. In the ranks of the newly appointed samurai are Walter, Jonathan, and Isabeau, whom Flynn had met in a dream before.

At the same time, a Black Samurai is causing chaos throughout Mikado by giving the Casualries books and thus knowledge which turns them into demons. The new Samurai confront her in Kiccigiorgi but she escapes, and they are given a mission to hunt her down and stop her.