Spyro: Year of the Dragon

From StrategyWiki, the video game walkthrough and strategy guide wiki
Jump to navigation Jump to search
Spyro: Year of the Dragon | Table of Contents | Gameplay | Walkthrough 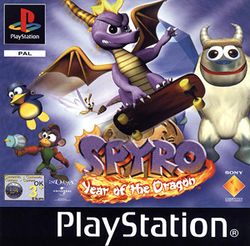 Spyro 3: Year of the Dragon is the third game in the Spyro series. It was the last Spyro game to be released for the PlayStation, as well as the last Spyro game developed by Insomniac Games. The game was released in North America on October 11, 2000, in the United Kingdom on October 25, in the rest of Europe on November 10. The name is a reference to the Chinese calendar; the year 2000 being the year of the dragon.

The game opens with a celebration at Sparx's Backyard, Spyro and Sparx arrived to see Cyndia with a wishing crystal and Blink with a power crystal that goes around the neck and when Spyro had gone to the Dragon Realms Story, where Sparx and allies, Betty, X-5, Sparky, Cyndia and Blink tells Flutter are going to read a story about the dragonfly kingdom and they are celebrating the "Year of the Dragon", an event every twelve years where new dragon eggs are brought to the realm. During the celebration, Nina, Flash and the dragonfly people saw the magical crystals in the crystal shard statue. Suddenly, a crocodile queen named the Sorceress are going to mind up the crystals and however, a cloaked anthropomorphic rabbit girl, Bianca, invades the Dragon Realms with an army of Rhynocs and steals all of the Dragon eggs. None of the dragonflies are expect a brave dragonfly girl named Stella. She looked around, but she can't find it and she flew into the story. Blink needs some unspected help with Stella and the allies had jumped into the Dragon Realms and saw a dragon named Spyro, along with Blink, Sparx, Betty, X-5, Sparky, Cyndia, Flutter and Hunter, are sent down a hole to find the thieves and recover the Dragon eggs.

As Spyro and the gang travels through each realm, acquiring aid from local inhabitants, and bartering with Moneybags for passage to new areas, Bianca abducts and imprisons Hunter. It is later revealed that the Sorceress is seeking not the baby dragons themselves, but merely their wings to concoct a spell that can grant her immortality. Once Bianca finds this out she feels sorry for the baby dragons, and defects to side with Spyro, Hunter, and the allies.

Celebrations resume after the Sorceress' defeat, although Blink, Sparx, Betty, X-5, Sparky, Cyndia, Flutter, Stella and Spyro is unable to locate Hunter. Searching throughout the realm, Spyro's friends are reluctant to say anything of Hunter's whereabouts; Spyro and the gang ultimately locates Hunter out on a date with Bianca, and laments about another hero "falling" for love. The Sorceress gives Stella a jewel crown and the necklace. Stella is become a crystal outfit.

Then, the dragonfly kingdom are back to normal and Nina, Flash, The Sorceress and the dragonfly people are having the year of the dragonfly festival. And the baby dragons then return to the Dragon Kingdom. Just in time to have some tea and cookies.