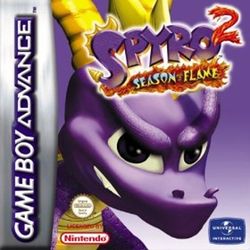 Spyro 2: Season of Flame is a platform game released for the Game Boy Advance in 2002 in North America and the PAL regions. The game was not released in Japan. The game begins where Spyro: Season of Ice ended and it re-uses many of its elements, including the isometric view. Unlike Season of Ice, this game places Spyro on Fiery Island, along with an old ally, Sheila the Kangaroo. This is the first game in the franchise to feature the ability for Spyro to breathe multiple breaths.

Spyro 2: Season of Flame is like most other Spyro Games where Ripto has tried (and failed) to beat Spyro. This time he has taken away all the fireflies that give the dragons their fiery breath. Spyro returns from a vacation but quickly has to get all of the fireflies and stop Ripto from taking them again. But Ripto has his henchmen...