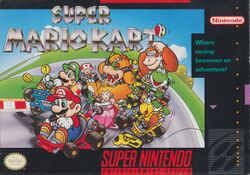 Super Mario Kart is the first video game in the Mario Kart series, released in 1992 for the SNES. Players race go-karts as one of eight characters from the Super Mario Bros. series. It is believed this game gave birth to the sub-genre of kart racing. It features advanced graphics for the time thanks to its use of Mode 7 texture mapping. The game features single player mode, verse mode, and battle mode using one of eight playable characters. The music was composed by Soyo Oka and Taro Panedo, and included some sequences and variants of Koji Kondo's works, though he had no direct involvement in the project.