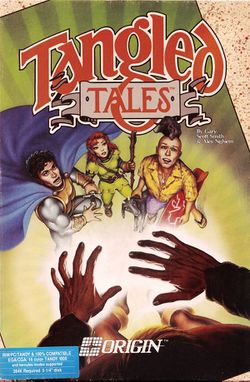 Tangled Tales (subtitle: The Misadventures of a Wizard's Apprentice) is an adventure game with role-playing elements, developed and produced by Origin Systems and released in 1989.

It is the direct sequel of Realms of Darkness. It was developed by the same authors, Gary Scott Smith and Alex Duong Nghiem, and it includes a significant amount of clear references to the previous title. 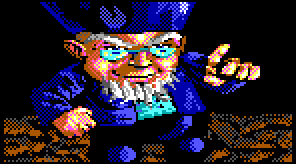 Portrait of author Gary Scott Smith, used in the game to represent his own character Gnu Gnu.
It can be assumed that either Jenkins or Sidney is the portrait of author Alex Duong Nghiem, of Vietnamese origins.

(From in-game text of Ultima VI: The False Prophet)

Once upon a time, in a strange land far away, there was a wizard's apprentice. His master, Eldritch, sent him on three quests, knowing he would learn his lessons best with the real world as his classroom. He encountered many strange and wonderful things. Ghouls and griffins stood in his way, and ghosts and giants as well. But he also found new friends, and brave adventurers to help him. He rode on a flying carpet, and on the back of a giant turtle.

Finally, after exploring an abandoned mine, a pyramid, and a castle in the clouds, he finished his third quest. He had learned so much on his journeys that his master rewarded him well, and declared him a wizard in his own right. He soon opened a school of his own, and as the years passed, and students came and went, his beard grew long with years.