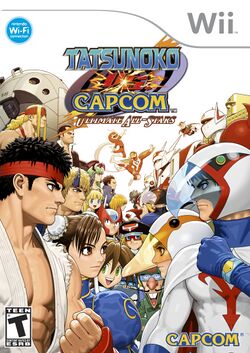 Tatsunoko vs. Capcom: Ultimate All-Stars is a crossover fighting game in development by Eighting and published by Capcom for the Wii gaming console. The title is Capcom's seventh game in the Versus series, and will be released in North America, Japan and Europe in January 2010. The game was originally released exclusively in Japan as Tatsunoko vs. Capcom: Cross Generation of Heroes (タツノコ VS. CAPCOM CROSS GENERATION OF HEROES, Tatsunoko vs. Capcom: Cross Generation of Heroes?) for video arcades and the Wii in December 2008. Fan reception of the game led Capcom to localize it with help from Tatsunoko Production to deal with licensing issues involving the Tatsunoko characters.

Tatsunoko vs. Capcom features characters from the Japanese animation studio Tatsunoko Production and video game company Capcom. Like traditional fighting games, gameplay consists of attempting to knockout the opponent on a 2D plane. This plane creates a 2.5D environment in conjunction with character models and backgrounds rendered in 3D – a first for the Vs. series. Tatsunoko vs. Capcom's simplified three-button attack system is a departure from Street Fighter and some previous Versus fighting titles since the game was developed with the Wii in mind.