From StrategyWiki, the video game walkthrough and strategy guide wiki
Jump to navigation Jump to search
The Bimbles | Table of Contents | Gameplay | Walkthrough 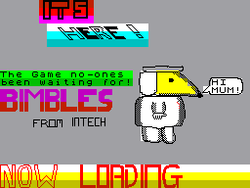 The Bimbles is a text adventure game, which was released by Intech on the Sinclair ZX Spectrum in 1986; it is a spoof of the FilmFair television series The Wombles, which was originally aired on BBC1 from 1973 to 1975 (and later got a game of its own in 1990). The player takes on the role of a Bimble named Fungo (a pun on Bungo), who must find out who is trying to destroy the Bimbles' burrow and stop them - and the player must type two-word verb/noun sentences to make Fungo perform actions. In the game, Fungo will encounter several characters, who will answer him if he talks to them; he will also come across some obstacles (for which he shall need a specific object or password to get past). The game was authored using the Quill Adventure System, which was used for 514 other ZX games.

However, the game suffers from being impossible to finish; on its forty-sixth screen (which has a huge iron gate), typing in the command REDE GREEN is supposed to open the gate but doing it just resets the screen to its original state (this will also happen if you type in REDE by itself). If you took the pipe, radio or book from three of the previous screens, you shall have to smoke, switch on, or read them to end the game at this point (as all three of these objects shall kill Fungo if he should use them and the second and third ones cannot be dropped) - but if you did not, you will have to switch off the console. The game's death screen also measures the player's progress in copies of Star Firebirds (which was Insight Software's ZX conversion of Nintendo's Space Firebird) and gives him or her the option to try again; if accepted, the game returns to its start screen and starts again, but if declined, it terminates.