The Typing of the Dead/Chapter 4: Despair 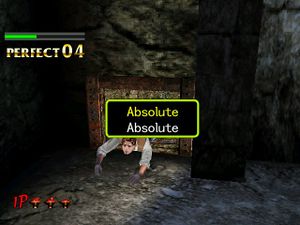 The path forks on whether or not you save this man.

The majority of this chapter takes place underground as you search for the colosseum where you captured friends are being held. After a short cutscene, you start out in a large cavern and are immediately attacked by two zombie skeletons from the left. Turning back to the right you'll face two more zombies before turning to left and going up the steps there. As soon as you get to the top you'll be attacked by three more zombie skeletons, and two more follow them from the right around the water, just when you think the barrage is over. When they've been destroyed, you'll move forward to the top of another set of steps, this time leading down, where you'll take out four single-letter birds that fly in from the front.

Heading down the stairs, you'll find a civilian being mauled by a one of two zombies through some metal bars. The zombie's target phrases will appear before you turn to the right and see them, so start out by typing the bottom one, which is for the zombie that has the human. When you've taken them both out, you'll receive an extra life if you saved the man, and two more bonus items will appear behind the bars where the zombies were. The item on the left is a dictionary, either Alien or Genre, so it's probably better to skip it for the upcoming mission.

Turning away from the bars, you'll begin the mission for the chapter, which consists of repelling all zombie attacks for 30 seconds. Zombies will come in from the left or right and charge down the steps toward you while projectile throwers lob single-letter missiles at you from above. After the mission you'll head up the stairs and get the first and only path form decision. If you rescue the man being pulled into the wall when you turn to the left at the top of the stairs, you'll continue on through the cavern. If you don't get him in time, you'll go after him down the rabbit hole.

After rescuing the guy from certain death, you'll turn around to be confronted with two running zombies attempting a sneak attack. After you take them out you'll continue on the way you were going through the hole in the wall, where you'll find another three zombies in the hallway beyond. When they're down you'll move into the hallway and find a new enemey, the zombie alligator. These creatures crawl on the ground, walls and even the ceiling, and require two hits to destroy. Take out the two that come at you from above, then move on to two more zombies coming at you from the end of the hall. Be aware that a third zombie will rush you from much closer coming from the right while you're in the middle of taking out the other two.

Moving forward, two more zombiegators will drop down from above before you make it through the door at the end, where you run into three more zombies, right in your face at the beginning of the next hallway. This is a short hallway, and when you've taken out your welcoming party, you'll shortly find yourself at the end with steps heading up into the light. Before you can ascend, you'll have to defeat four more single-letter bats. As soon as you're up the steps you'll need to save a man being attacked by two zombies to your right. With no time to receive any thanks you'll spin about and proceed to take out two more zombies coming at you from a distance, followed by two more coming down from the steps to the colosseum, where you'll find your friends and meet the chapter boss.

If you let the man get pulled into the hole in the wall, you'll slide down after him in a rescue attempt. At the bottom you'll turn to the right and take out one skeleton zombie before backing up the other way and running into two more zombies that attack from the left. Down on the ground here, you'll find the corpse of the man you were too slow to save. You'll leave that room and turn right down the hall outside where two shambling zombies will slowly walk toward you, followed by a faster one that runs in behind them. You'll head down a very narrow, twisty corridor and take on four bats from above when you get to the end.

This puts you out on a stone balcony where a strong zombie is waiting to you left. When you've taken him out, bonuses pop up on the barrels behind him, including a Gold Frog. From there you make your way down some steps and start moving out across a broken column laying in a shallow pool of water. Before you can get across, two more zombiegators drop down in front of you. When you've dealt with them, you'll turn to your left to find another guy being chased by a zombie. Continuing on, you'll finish crossing the column then go through the door on the other side, where you'll see two more bonuses in the hallway there.

Right past the bonuses you'll be attacked from close range by two zombies coming around the corner from the left, and then two more zombiegators will attack coming down the steps when you face forward again. At the top of the stairs the alligators came down, you'll find two zombies as soon as you turn to the right. Turning back the other way, you'll have two more zombies walking up to you. Moving on, you'll need to take out just two more zombies coming out from the steps leading up to the colosseum where your friends are being held. 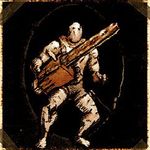 This boss is pretty simple. His target phrases are all long sentences, and you type them while running backwards through the maze of the colosseum while he chases you with a giant chainsaw. The sentences tell a story, and you don't do any damage to him until you've completed the whole story, so if you mess up on this boss, it could turn into a very long fight. Once you've typed all the sentences out and completed the story, the boss will take 33% damage to his health bar. Simply finish three stories to beat him.