This stage is divided into two parts; a maze-like room filled with ladders and small corridors, and a fire-filled obstacle course. You begin with the maze. There are two ways through the first half of it; the normal route that takes you up and over, and a difficult but useful shortcut. To start, cross the bridge and enter the building. If you decide to climb the first ladder, stop as soon as you collect the 1000 point bonus. Climbing any higher will result in a falling rock that kills you.

Shortcut
There is a way to skip past a good portion of this level, but it’s rather difficult, and the effort involved may make it rather prohibitive. From the entrance, walk to the right until a door closes behind you and you meet a witch. The witch says she’ll show you a secret if you defeat the enemy above her. However, to do this is not as simple as walking up to him and defeating him. You must do it in a very special way. (However, in the FDS version, it is as simple as walking up to it and shooting it until it is destroyed.) 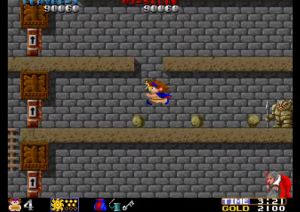 Return to the entrance and climb up the second ladder, and up the second ladder after that. You should be in front of an entryway on the third floor, where a silver key awaits on the right. However, three sections of the floor will fall if you try to walk straight to the key. Inch across the floor to make each section of floor fall and hop over the resulting gap. Collect the key. Next, you must intentionally fall to the second floor and trigger the enemy there to attack. He does this by rolling eight boulders at you in rapid succession. You must be prepared to hop over all eight of them, which is the most difficult part of this shortcut. If you succeed in jumping over every boulder (or at least surviving the attack), the enemy will begin to rush towards you (walk closer to him if he doesn’t move right away.) You must unlock the door to the left with the silver key that you collected above and allow the enemy to follow you out of his room, at which point he will burst into flame. Then return to the witch on the first floor. Only if the enemy above was killed in that exact fashion will the witch transport you through the wall and allow you to proceed on the other side, as well as power up your fire magic by one level.

If you opt not to take the shortcut, your goal will be to first climb to the top of the room. Many sections of the room are guarded by headless zombies that wander back and forth. You’ll see a few treasure chests that may lure you off track, but remember that there’s no more shopping, so gold only serves as bonus points. You’ll also see a faerie statue that may look impossible to reach. However, if you face left from the opposite side of the wall, and tap down while you do so, you will inch through the wall and get closer and closer until you can collect the faerie it contains. Because of a particular challenge that you’ll face in the fifth and final stage, you’ll want to do everything you can to avoid dying so that you can hang on to this faerie.

As you reach the top, you will encounter a dragon like the ones you’ve faced before. A ladder leads to a ledge above him, and you can walk up there to collect hidden point bonuses, but don’t fall down the gap, or you’ll have to repeat your climb to the top. This dragon is just like the one you faced at the end of Stage 3, with the ability to breath fire while on the ground and in the air. Your past experience should guide you in this fight. When the dragon is defeated, you will see a ledge up and to the right beyond the gap. Leap to this ledge to continue on through the second half of the maze.

In general, you should climb down immediately. There are some hidden bonus points if you explore the passage to the right, but you do not have an abundance of time in this long level and the points aren’t worth it. Instead, climb down to where you see two headless zombies wandering back and forth. Remove them and walk to the right. A large crystal should come into view. Attack the zombies on the other side of the gap, then drop down to collect the crystal. From there, make your way back up and to the left to continue your descent. (If you explore the ladder to the right, you’ll find an extra life, but only if you have a cloak and can sustain the hit from the falling rock.) 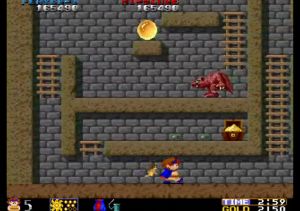 Continue making your way down until you are above the room with the silver key. Walk to the right and another large crystal will appear. This crystal is guarded by a beast who is not as tough as he looks. This red dragon will alternate between shooting high fireballs and low fireballs. They come fast, but they are easy to dodge. Simply hold the joystick down all the time to squat under the high fireballs, and press jump to leap over the low ones. You can leap while you squat so you don’t have to let go. Fire at the beast whenever you can to clear him away. Then climb up the ladder to get the large crystal. Then climb down the ladder on the left to reach the wall beyond the witch. 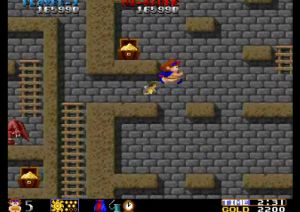 On the floor, if you walk far to the right, a stone creature will appear. Beyond him is a clock, which you should collect if you don’t already have one. Then return to the ladder on the left, climb up, and approach the gap to the right. You must jump to the right, and this is a particularly difficult jump to make because you will likely hit your head on the ceiling if you’re not out far enough. It may take you a few tries to succeed. (The FDS version makes this section considerably easier by extending the platform.) Once you do, jump over to the ladder on the right and climb up.

The next section is a series of jumps that you must perform very carefully, so as not to hit your head on a platform above and fall to the very bottom, costing you precious time and effort. There are cannons suspended from the ceiling. You can shoot these down as you get closer to them in order to make the jumps less dangerous. Take your time with these jumps to ensure that you are out far enough on the platforms to successfully reach the next one. Ignore the ladder that appears on the left, and continue to leap all the way up to the ladder on the right that leads to the second half of the stage. 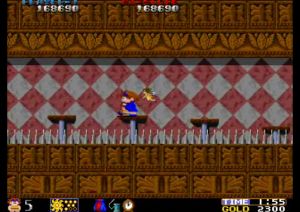 Climbing up the ladder, the next threat you must deal with are bats. Take them out as you climb the steps and reach a bed of spikes with some platforms that rise and fall. These platforms only sink momentarily, and you can actually jump in place to avoid getting stuck by the spikes below. Watch the next platform before you jump, and jump in place if you need to wait for the right moment to advance. 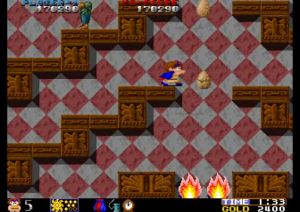 Once you clear the bed of spikes, two birds will appear as you drop to the floor below. Jump up the next set of steps and you will arrive before a pair of torches. Carefully leap over them to the left. Then climb down the left side, climb up the ladder, and approach the gap to the right. This time, an egg will be floating in the way. If you shoot the egg, it will rise higher or drop lower, depending on its current height. Hit it so that it drops lower and make it easier for you to leap over. Go to the right, climb up the next ladder and re-approach the gap, clearing away any headless zombie in your way. Once again, shoot the next egg so it drops lower before jumping over it. Then drop down the left side, being careful to avoid the zombie, and collect the clock if you need it.

Climb up the next ladder, remove any zombies in your way and leap over the gap one final time. Above the next set of spikes is a pulley. Jump up and grab it to zip over the spikes. Be prepared to push down when a ledge appear below and let go of the pulley before you hit the spikes on the wall. A few bats will interfere on your way to the next ladder. 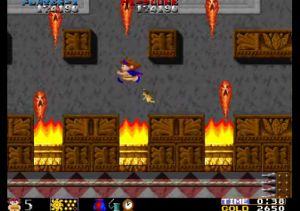 Climb the ladder and now you must leap over a set of flames that move back and forth. These flames are no different than the spiked traps from the second stage. Simply time your leaps over them carefully. You will reach a pit of flame where three fire spirits rise out at a time. Wait for the third spirit to rise before leaping over the fire. Do this for each pit, and then leap over the moving flames on the other side until you see another pulley. Jump up and grab the pulley to be transported to the left, letting go just before you hit the spikes. (If you drop a little too soon and land in the fire, that's actually a good thing: you'll earn an extra life.)

Climb up the ladder and continue to leap over the moving flames as you walk to the right. You will see three platforms floating in mid-air. These platforms start to drop when you land on them, so don’t stay on them any longer than you have to. Jump across the three platforms to the ledge beyond. Jump over the moving flames and drop down to the next gap. Just as you did before, you must time your leaps over the fire pits after the third spirit rises past you. Make it to the ledge beyond and you will reach the boss. 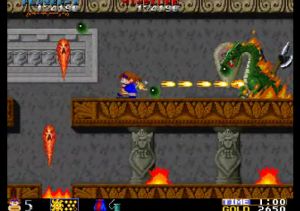 This boss is another dragon, but it is an entirely different dragon than any you have faced before. This dragon starts on the right and slowly approaches the left. As it does, it breathes green orbs which bounce up and down between the floor and the ceiling. Naturally, you must avoid these orbs at all cost. The best way to defeat this boss is to stand as far away from it as possible. This will give you the maximum amount of time to react to the motion of the green orbs and adjust your position accordingly. Shoot the dragon whenever you’re not busy moving to a safe location, but don’t take too long or the dragon will drive you off the ledge. Once the dragon is defeated, proceed to the entrance behind him, where you will obtain bonus points for any remaining time before proceeding to the next stage.