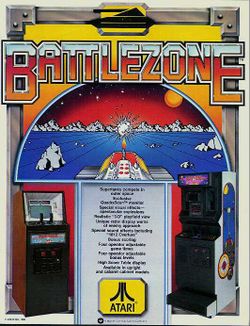 Battlezone is a first-person shooter arcade game which was released by Atari in 1980; it utilizes one Motorola M6502 (running at 1.512 MHz), with a Pokey sound chip running at that same speed, and a custom DAC. It was later ported to several other systems, and was included in several compilations - and common play in the U.S. can range from $0.25 to $1 per game (depending on how the cabinet is set). The default setting is $0.25 play with three lives and two bonuses at 15,000 and 100,000 points.

The action takes place on a plain with a mountainous horizon featuring an erupting volcano, a distant crescent moon, and various geometric solids (in vector outline) like cuboids, cubes and pyramids; the player views the screen (which includes an overhead radar view!), to find and destroy the rather slow tanks, or the faster-moving supertanks. Flying saucers and guided missiles occasionally appear for a bonus opportunity - and the saucers differ from the tanks in that they do not fire upon the player, and do not appear on the radar (but their appearance is signified by a "hovering" sound!). The player can hide behind the solids or maneuver in rapid turns once fired on to buy time with which to fire himself.