One thing to be aware of in this stage is time. Unlike the previous stages, you will have to move very quickly if you wish to explore the entire level and not run out of time. It is hard to complete the level in time if you spend too long in any one place. Note that if you truly wish to, you can take a shortcut that bypasses a large section of the stage. It is possible to take the path above the location marked (C) on the map, and continue your climb up to the upper section of the stage which leads to the boss. Just watch out for a boulder which drops from the ceiling when you reach the treasure chest.

(A): After freeing a captive shop owner at the start of the level, you must climb these steps where a plant will be waiting at the time. Immediately after you jump over the next gap, there is another plant waiting to surprise you. More dangerous than the plants however, is the first appearance of the witch, who materializes in mid-air. If you don't attack her in time, she causes flames to erupt where you stand. If you do hit her, she disappears and reappears somewhere else. Strike her before she can attack. They sometimes leave 500 Zenny coins behind when defeated.

(B): Watching out for the Fire Demon in the middle of the pillars, and the Skull Coin above him, make your way to the left side of the stage. Strike the wall in the spot indicated by the B, and you will reveal an octopus. Collecting the octopus increases your score by 100,000 points, easily pushing you closer to the next vitality bar increase, if not over. Strike the wall above the octopus as well to make it easier to claim.

(C): Watch out for the Fire Demon that occupies the pillar below this area. It's best if you remove him first, and then return to the pillar above. Strike the wall in the spot indicated by the C and you'll reveal a Yashichi, which grants you an extra life. Make sure no skeletons are rising out of the ground in the near vicinity when you attempt to collect it.

(D): Naturally, pairs of mummies pour out of the caves on all three levels of platforms. The lower two platforms contain captives, but these captives are a bit deceptive. They are both standing very close to a wall, from which flames erupt. The top captive standing where the D is offers nothing but gratitude, and the blue flame behind him causes poison. The captive below has a shop, but he is standing next to a damaging red flame. You can approach both captives, but be very careful with your timing if you chose to. If you drop straight down from the middle platform to the ledge below, you'll land on a POW, which should simultaneously destroy both of the witches that appear here. Prepare to encounter individual Stone Faces as you cross the bridge. They behave identically to those found at the end of the first two stages, hopping up in the air in an effort to crush you, especially when struck by your weapon.

(E): After watching out for the Spinning Skull Coin below, make your way up to the spot on the wall indicated by the E, and strike it. You'll find a 10,000 point Mobi-chan inside. Then turn around and jump over to the ledge on the left. Be careful if you strike the pots on your way to the dungeon entrance, the pot on the left typically contains a powerful mummy. Destroy it before you approach the dungeon, whose map is shown below.

There aren't many secrets to be found in this dungeon. Just watch out for the plant hiding in the ground just after the first treasure chest (which is trapped). Snake around from the one level to the next in order to reach the exit.

(F): Once you reach the top of the climb, you'll see a Fire Demon perched on a ledge with a captive. You'll need to lure the demon's fireballs over to the left in order to create the clearance you need to leap up and over to the right to continue on. Once you make it through, you can climb up the pillar and pay the Fire Demon back with your own weapon.

(G): Many of the pots in this area contain enemies, so be careful, especially when room to maneuver is in short supply. When you drop down to the valley below to free the next captive, another witch will appear. If possible, try not to kill her if she's surrounded by rock, or you won't be able to collect the money she leaves behind.

(H): Two more Stone Faces occupy the final bridge as you approach the boss. However, the ledge above the bridge is so low, that they will typical bump into it in their attempt to squash you. That means you can attack quickly without much fear of reprisal. After collecting the treasure chest above, beware of the purple plant waiting on the ledge to the right before the entrance to the boss' arena. Take it out from a safe distance before advancing. 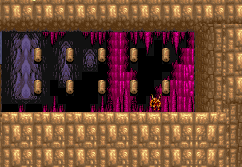 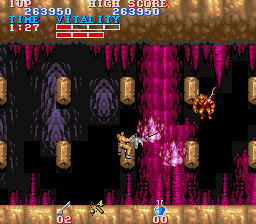 Not content with harassing Arthur in Ghosts 'n Goblins, the Red Arremer makes an appearance in Black Tiger. His first appearance is as a boss, more will appear throughout the rest of the game as basic enemies. The arremer's arena is composed of multiple short pillars, giving you a lot of options from which to strike. He will fly around the room in search of a good location to hurl arrows at you. Once he finds a place, he will remain there and attack you until you move, or strike him with your weapon. If you have a lot of armor and/or health, you can attack frequently from one position until he is defeated. If you don't have that luxury, you will need to move around in order to find safety and then attack when you get the chance. The pillars allow you to hop around off the ground and give you greater mobility. Keep striking the Red Arremer until all three of his health bars have been depleted.