Braid does not contain many enemies and most of them fill their purpose as part of game's puzzles rather than a hindrance to the players progression. These are all the enemies the player will encounter through the journey of Braid, listed in occurring order.

Monstars are the first and simplest enemies Tim will encounter. They will do nothing to attack Tim—simply pace back and forth in a simple pattern—but if Tim walks into them or one falls atop him, he will die. To kill them Tim simply has to jump on them. Doing so also has the added benefit of giving Tim a jump boost, bouncing him even higher up in the air than his original jump did. Boosts can be increased even more by landing on further monstars after the first boost.

The Claw is Braid's homage to the Pirahna Plant of Super Mario fame, and indeed they operate in a similar fashion in this game too. The claws will pop up out of green pipes and snap at anything above, usually in timed intervals. If Tim gets chomped by the claw while it's outside it's pipe, he will die. Other creatures, such as the monstar or the mimic, are not invulnerable to the claw's attack either. If they get bitten, they will die too. It is not possible to kill the claws, the player must avoid them by jumping over them or running past them when they are inside their pipes.

Mimics are the bunny-like creatures in the world of Braid. Although they may look cute and cuddly at a first glance, they will viciously attack Tim if he gets close to them. If Tim gets mauled by one them, he dies. To kill them off, Tim simply needs to jump on them, just like with the monstars. In some levels they are also obstacles, which block the player from getting to a certain location. Some mimics burrow in the ground, exposing only the flower on their back. When Tim gets close they might dig themselves out and attack, so be on your toes with flowers around. 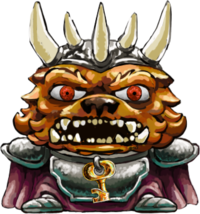 The only real boss character encountered in Braid—the one simply named Boss—will be encountered twice throughout the game. His first appearance is in

3-7 Lair and his second and final appearance is in

5-6 Lair. Both times he is be dealt with in similar fashion. The Boss is the only enemy with a life counter; he requires five strikes to be out of play. Around his neck hangs a gate key which Tim is required to get to continue onward through the level.