As soon as you arrive in this room, a trio of Fighters are just about to descend upon you. Quickly run to the right and drop down the gap next to the conveyor belt.

As you enter this room, hold the direction pad right to fall on the ledge. Collect the light blue key to the right, and jump on the elevator. Let it take you back up to the room above.

Kill the Knight that is patrolling the platform that you land on, and open the red door. Now you must retrace your steps so that you end up back in the previous room from Step 73. Repeat the directions that you followed from Step 68 on until you return to the room.

Once you return to the room, Make your way back to the left, and reach the green door in the upper left corner. Open it and pass through.

You may not be able to reach her yet, but at last you can see that the Princess is alive and well, and waiting for rescue. She won't have to wait much longer. For now, open every door on your way to the left: red, yellow, blue, yellow, and pink.

Drop down to the floor below and collect the three yellow keys. Then open the pink door in the lower right corner and return to the Princess room.

Open all of the doors to the right, up until you reach the jar. Watch out for the Fighter. Then backtrack to the left and return to the previous room, and open the bottom green door. Fall down to the room below, but hug the right wall.

Push to the right as you fall. Pass over the elevator, and collect the two green keys. Then charge through the top light blue door.

Collect the pink, red, and dark blue keys here, and return to the room on the left. While your back there, it is very important that you remain on the highest level of platforms. Traverse all the way to the left side of the room, and open the top yellow door. Do not fall down and collect those two yellow keys yet. Pass through the top door.

Make the long jump from the entrance to the light blue and green doors in the middle. Then jump to the left again to reach the cache of keys. Collect all four and then, making sure that remain on the highest level, return the way that you came to the previous room.

Now you may fall down and collect those two yellow keys. At this point, you are going to retrace your steps once again so that you return to the room from Step 74. For your reference, the directions begin at Step 66.

Once you have returned to this room, open the dark blue door on your left.

Step on to the elevator that awaits you as soon as you arrive, and ride it up to the room above.

Push the jar to the left and out of the way, then reposition it as a platform to reach the ledge to the right. Then carefully get between the block and the wall of spikes. Push the block to the left so that it hangs over the edge of the platform, and voilà, you can now reach the two red doors that imprison the Princess. Open them up and run to her to end the game. 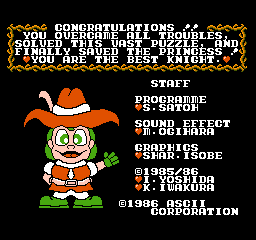