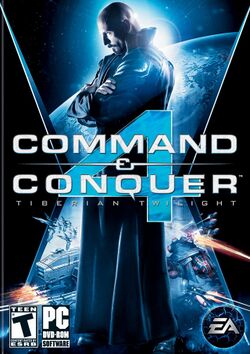 Tiberian Twilight is the final game in the current storyline. The prologue to the game takes place in the year 2062, 15 years after the events of Tiberium Wars and 10 years after the final events of Kane's Wrath. During this time period, Tiberium has spread all across the globe and is predicted to render the planet uninhabitable by 2068. Unexpectedly Kane, the leader of the Brotherhood of Nod, meets with the Global Defense Initiative leaders, and proposes building a "Tiberium Control Network", which would allow the spread of Tiberium to be controlled, as well as turn it into an inexpensive power source. The story resumes 15 years later after the formation of the alliance between the two factions, as the Tiberium Control Network is nearing completion. However, extremists from both factions cause unrest, which sparks the Fourth Tiberium War and puts an end to the alliance.