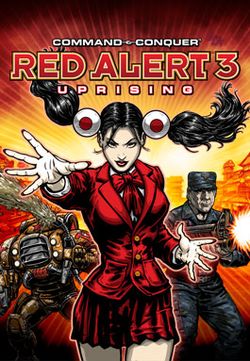 Command & Conquer: Red Alert 3: Uprising was released in March of 2009. This game is an expansion pack for Red Alert 3, but does not need the original Red Alert 3 installed on your computer. This game is only available through digital download at the EA Store or an authorized online retailer.

The Uprising campaigns begin after the end of the Allied Campaign of Red Alert 3.

This game features four new mini-campaigns, including one Yuriko Campaign that focuses on her origins. Uprising also features a mode called Commander's Challenge in which players can play against AI commanders with various skill levels. This mode was also released as a stand-alone downloadable game for PlayStation 3 and Xbox 360.