This mission introduces the Bullfrog, the Flak Trooper, Natasha and the Conscript.

Try not to lose any soldiers you trained or the Bullfrog.

Keep Natasha Alive. While she may be retrained when killed, she is still needed to complete the mission.

The Magnetic Satellites are useful for getting rid of the enemy Battleships quickly. Remember that the satellite can be moved while it is active.

This is an easy introductory mission. Take Natasha toward the Fortress and eliminate the enemy forces found there. Call in an airstrike to destroy the gate blocking your access. Enter the fortress grounds and kill all the enemy infantry, starting with the two that ambush you as soon as you enter. For best effect, try to move Natasha to hit multiple targets in a line. 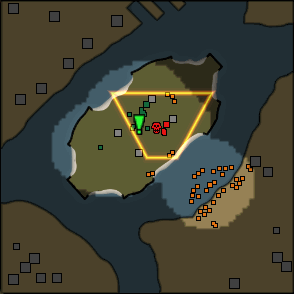 Enemies attacking from the east.

Once all twelve enemies are destroyed, your co-commander Oleg will join you, and you will be given the objective of training five Flak Troopers at the Barracks.

Secure the Fortress against the attack from the east. Build Conscripts once you are given this ability, and use them to repel infantry.

If desired, you can have Natasha airstrike the units waiting east of the island, although this is a dangerous tactic as the middle battleship can easily slay Natasha if you aren't careful. Aim for the personel carriers, as they appear later in the attack waves.

Once the attack is repelled, you will be supplied with a Bullfrog vehicle. Use this to catapult Natasha or five conscripts across the ocean to the east and destroy all troops in the region. Engage only the enemies trying to destroy the museum, and ignore the vehicles on patrol. When all attackers are defeated, you will then be supplied a second Bullfrog in which to catapult back to the area of your Fortress. 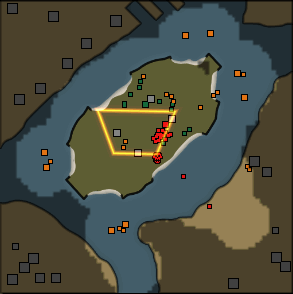 Map of Battleships surrounding the island.

Once all troops are removed from the south-east, you will be supplied with more credits and the fortress will be attacked. Use all of them to hire Conscripts. Use a Rally Point near the Fortress to place your soldiers in a defensive position. If you are quick, you can place Natasha in the water near one of the corners to kill a battleship during the in-game cutscene.

Use Natasha to call in air strikes against the Shogun Battleships surrounding the island. Have a few Conscripts or Flak Troopers to escort Natasha, if you feel this necessary. While Natasha can hold her ground against a few units that attack, she cannot take on a whole army by herself, nor can she hold against a single enemy chipping away at her health. Remember that you can use waypoint mode to have her attack targets in a given order.

When all battleships are destroyed, all enemies will retreat. Mission accomplished!