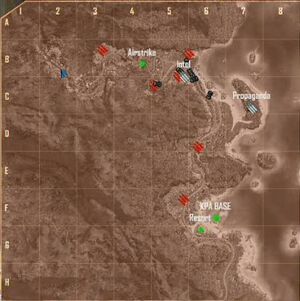 A discussion from the past between O'Neill and Psycho. Things go wrong. Back to the present.

Get away from the crash site[edit]

You begin by running out of your crashed VTOL. Follow the soldier's orders and make your way to the ridge. This is your typical tutorial mission: just follow the green arrow/dot on your map, ignore the explosions going on around you. Once you reach the village, something big will take you out. After waking up by Emerson's promptings, you'll see the package take off.

Join up with the Sierra Airstrike Team[edit]

Near a small river you'll get your first KPA contact, and like many enemies in the game you can take him down or stealth around him, sticking to the bushes. Generally, you'll want to use stealth through most of the game, or at least a fair amount of cover. The greatest danger you can be in is when the enemy surrounds you, giving your armor no chance to recharge.

Head to the beach resort[edit]

To your north-east there'll be a few soldiers and a patrolling jeep. At the very least, you should tag them with your binoculars and keep an eye on the jeep as it trundles around. You'll also get some comms about intel that you can pick up. It's on the way, so stop by.

Getting the first secondary objective is pretty simple. Make your way down the hill to the small KPA encampment. Stealth is a perfectly viable option here, just make sure to keep behind cover when you're recharging your energy. Inside one of the containers is a cache of anti-tank mines and C4, so be sure to stop by and pick those up for some fun later. In the container next to it, there are also two AY69 sub-machine guns, which at this point are better than the pistol you're carrying. Also in here in the intel, so download that.

The run to the beach resort isn't too bad: you can run along the road, avoiding KPA infantry and jeep patrols by sticking to the brush. You can also shoot them all. Either way. If you want the long way, you're also able to swim around to the other side, but it takes a little more time. On some crates next to the beach bar are Claymores, C4, fragmentation grenades, and AY69 ammo.

Seems there's a thing that needs explodin'. You can just make a beeline for the yellow marker when you get the objective, swimming across the water. It's not very well-defended, and either using force or stealth can be accessed easily. Inside the building you can find an assault scope, FY71 and ammo, explosive charges, claymores, and grenades. Use some of the charges on the station (that large device with the radar dish rotating on it). Keep in mind that the explosion will alert anyone that isn't dead. Team Idaho says thanks.

Make your way along the coast to the primary objective. Along the way, there'll be a roadblock that O'Neill will take out for you, and nearby there'll be some soldiers with shotguns. Other than that there isn't much else worth noting. Do keep an eye out for the men on the mounted guns: you don't want to take them on a frontal assault, just cloak up and move around them, or take them out quickly with a headshot. Up next is the resort.

The beach resort is probably the first real challenge you've faced so far. Multiple vehicles including a tank) patrol its perimeter, the area is infested with KPA, and except for some bushes on the outside, there's not a lot of places to hide. The area does get bombed from time to time, however, which might take out one or two targets. Anyway, make sure to head to the lookout point and tag as many targets as you can; you'll want to know where they are at a given point. You need to take out all the reinforcements to continue. Try not to be too obvious about what you're doing, or more enemies will be called in and you'll be shelled heavily.

You'll need to take out the enemies in the beach house. The front is pretty well guarded, so sneak around and take them out from behind.

Pretty straightforward. The hut in the middle island holds explosives as well as some enemies to take out. There's a bunch of ammo and some more SMGs, but make sure to get the missile launcher at least.

Now you need to take out a tank. Unless you're good with some tossed explosives, make good use of that missile launcher and unload a few missiles into it. Then head back to the beach house. You'll need to shoot some soldiers to get the game to realize you've secured the area, so do so.