Eggerland Mystery is a puzzle/strategy game developed by HAL Laboratory for the MSX computer system in 1985. The game is the first in the Eggerland series.

The game offers two modes of play and a constriction mode. The primary game (Game A) consists of 105 stages which function as puzzles for the player to solve. These stages proceed linearly and upon the completion of every five stages the player is presented with a bonus stage in which the goal is to destroy as many monsters as possible before time runs out.

Unique among the Eggerland series, Eggerland Mystery is the only game to use a point scoring system. 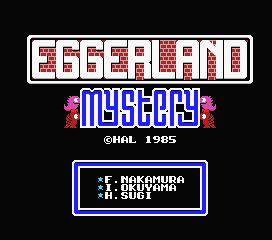 Opening screen of Eggerland Mystery for the MSX Home Computer.

King Eden and his three daughters governed Eden Land with love and peace and the land was blessed with a rich harvest for many years. However, one day monsters appeared who longed to make Eden Land their own dominion. They attacked the land, frightened the people, and kidnapped the eldest daughter of the royal family (Lala). Edenah, the great guardian of Eden Land, witnessed the whole spectacle and grew angry, confining the monsters to an underground realm known as Eggerland. Then, he split his body up into Diamond Framers and his heart into four parts (North, South, East, and West) and discovered a young man named Lolo that would set forth in Eggerland to rescue Lala and defeat the monsters residing their by solving the complex labyrinth. Lolo discovered the Four Gods, collected the Diamond Framers, and saved Lala, escaping the monsters' pursuit. The King was impressed and permitted them to be married and they were given a beautiful land from the great Edenah and became king and queen and were loved forever. 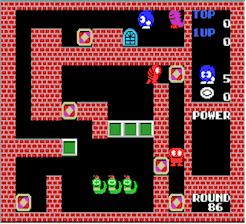 Eggerland Mystery is the first game in the series and, as such, is the introduction of the formula used in many of the series' games. It plays out in a linear fashion, meaning that when Lolo clears a room he proceeds directly to his next challenge without having a choice about where he will go next (which is not the case in some of the other games in the series where there are multiple doors in each room). The game has 105 Rounds that must be cleared in order to complete the game and the difficulty increases with each round that is completed.

Five monsters only are featured in this game: Snakey, Gol, Skull, Alma and Medusa. The remaining three will be introduced in the second title.