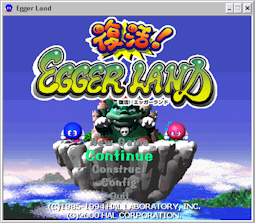 It was released in Japan as 復活! エッガーランド, pronounced as Fukkatsu! Egger Land.

The game contains 194 rooms and a Construction Mode. Like Eggerland Episode 0, with Construction Mode, players can easily generate their own custom levels as .txt files and share them with their friends or, if they choose, upload them via the Internet so that anyone can play them. There are thousands of user-made stages that are available for download on many Eggerland fan databases.

(from the Japanese manual, with translation assistance provided by Goryomae (??) of King Egger & Pleasant Friends)

Once upon a time, a long time ago, there was a place called Eden Land, which was blessed with love and peace. The people of Eden Land were very happy and their laughing voices could be heard throughout the country. However, during the reign of King Eden VI, monsters started wandering the countryside in Egger Land and the incarnation of evil, "King Egger", suddenly appeared. King Egger's ambition was to conquer the world and he commanded the monsters to invade Eden Land. "Edenah", the great guardian god of Eden Land, spoke with King Eden VI and gave him 12 sacred gemstones to use in capturing King Egger. King Eden VI engaged in a violent battle with King Egger and was able to defeat him. He then took King Egger to a shrine in the remote region of Egger Land and used the 12 sacred gemstones to create a seal which would confine the devil a way forever... For 500 years, the people of Eden Land were again blessed with peace. However, one day, a great lightening bolt came down from the sky and struck the land. After that day, the skies became cloudy and the seas became rough. The people of Eden Land became anxious, for they feared that this was a sign that the gemstone seal was breaking and that King Egger would be revived! In order to determine the truth of the matter, King Eden XIII dispatched his only daughter, the royal princess "Lala", to investigate the shrine ruins in the remote region of Egger Land, where King Egger had been sealed away. Unfortunately, King Egger came back to life as soon as she entered the shrine. He captured her and he scattered 12 sacred gemstones all over Egger Land. When the people of Eden Land heard the news, they were overwhelmed with fear and despair. Fortunately, the brave boy "Lolo" of "Gentle Land" happen to visit Eden Land around this time. After learning about the situation from the King, he immediately set out for Egger Land to save princess Lala.