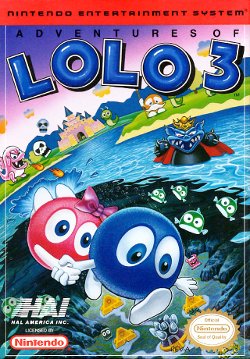 This game was the last title to be released in North America and was also the longest. Its whopping 100 stages made it over twice as long as the previous two titles on the NES and this game actually seemed a bit more like an actual adventure. Lolo and Lala were both playable in this game (having the ability to switch between the two characters) and traveled through an explorable world with locations that contained the levels that had to be completed in order to progress through the game. The game was, therefore, not entirely linear like previous titles, and some places could not be visited until others were completed first.

For example, the Tower (Level 3) requires a Key to open it (which is obtained upon the completion of one of the caves: Level 2), and at the top of the tower Lolo/Lala has to create a rainbow bridge with the Rainbow Egg which is found in another cave: Level 1. Level 1 and 2 can be visited in any order, but they must be completed before Level 3 can be finished. 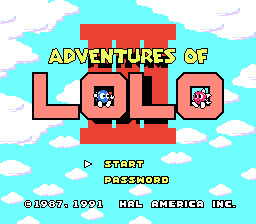 Lolo, Lala, and their friends have lived peacefully for many years, ever since the defeat of King Egger (in The Adventures of Lolo 2). But suddenly his son and heir, the new King of Eggerland, launched a hollow capsule filled with a strange potion that turns the inhabitants of Lolo and Lala's tiny kingdom to stone. Only Lolo and Lala, basking in the sun at the edge of the lake between the two kingdoms, were spared this horrible fate. Brave in the face of adversity, our hero and heroine set out together to defeat the evil King and cast off his spell. Only you can help our brave pair now...