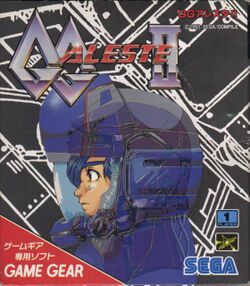 GG Aleste II (GGアレスタII, GG Aresuta Tsu?), released as Power Strike II in Europe, is a vertical shooter for the Sega Game Gear in Compile's Aleste series and the sequel to GG Aleste. It was released on January 10, 1993 in Japan and Europe.

In 2070, Earth was protected by the cross-border organization "Earth Joint Forces". Based upon reflection of the previous incident, the Earth Joint Forces Headquarters considered deploying the strongest ALGO military satellite, which has a strong defense against foreign enemies. The most important of these military satellites was the ALG-45 "Algo". It is the strongest military satellite on Earth, with a sphere about the same size as the moon and protected by hard armor. The deployed satellite Algo was supposed to be a reliable guardian star for Earth. However, an incident suddenly struck one day, despite the speculation of senior military personnel. Deep and quiet.

It all began with the attachment of an unknown "object" to the satellite Algo. The "object" that seems to have drifted from outer space has surprisingly parasitized the main computer of the satellite Algo and gained its mighty power. It then flew some of its cells, which have parasitic abilities, into space. The "object" --- the parasite began to act according to its slightly existing engraved wills of "destruction" and "breeding".

A solar storage plant that supplies Earth with important energy source. A platinum fighter was flying to the test site adjacent to the plant. GG Aleste Model II "Lance Bird". A prototype for a new aircraft during a test flight. The flight test went smoothly, and as the live ammunition test was about to begin, test pilot Alice saw a strange shadow on the sensitive sensor. At the same time, several signals appeared on the cockpit screen. The wreckage of the destroyed plant was reflected there. And a strange shadow spreading on the screen. It was a fusion of cells released by the parasite with the wreckage of the plant. The main computer of GG Aleste II sounded a loud alarm and repeatedly called to repel the "enemy" on the screen. Alice shakes off the words of the test crew to stop and heads for the suddenly appearing "enemy". GG Aleste II burns fire through its engines.