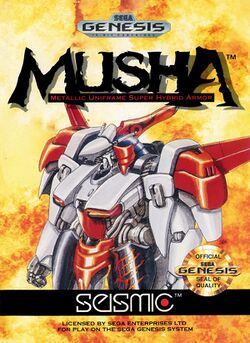 MUSHA known in Japan as Musha Aleste (, Musha Aleste?) is a vertically scrolling shooter developed by Compile and released for the Sega Genesis in 1990. An entry in Compile's shooter series, Aleste, MUSHA places the player in the role of a flying mecha pilot who must destroy a large super intelligent computer threatening planet Earth. The game had a working title of Aleste 2 and originally featured a style similar to the first game, but this was changed to a more original Japanese aesthetic and speed metal soundtrack.

Initial reception for MUSHA was mixed. Critics generally agreed the game was enjoyable with great graphics, but found themselves overwhelmed by the number of scrolling shooters on the Genesis and felt the title was unremarkable and lacked challenge. The game was re-released on the Wii Virtual Console in Japan in 2008 and the West in 2009. It was re-released again on the Nintendo Switch Online + Expansion Pack service in 2021. MUSHA has been more well-received in retrospective reviews, where it is cited for its challenging gameplay, strong soundtrack, and graphics that were ahead of its time.

Though the game's plot is essentially the same between the Japanese and western versions, the western version makes a few changes such as in the dates and the character's names.

In the 91st century, mankind built space colonies and moved its residence to space. However, the environmental control system of the colony group "Little Japan" located on the other side of the moon LaGrange 2 suddenly shut down, and its core "Dire 51" started attacking humanity.

Dire 51 attacked other colony groups violently, collecting materials and debris and strengthening and expanding its own colonies. The huge and strange appearance of the enemies eyes became a sign of hatred and fear among people. Though the cause of Dire 51's malfunction was hurriedly investigated by many research teams, no conclusion could be found about the cause. Meanwhile, Dire 51 develops a powerful armor and begins its attack against Earth.

The battle on Earth intensifies, and the situation gets into a staggering state. In order to defeat the attacking forces, Earth finally places its last bet on the MUSHA unit.

The year is 2290. The human race is spreading through the Solar System, with many colonies on several planets, moons and stations at all of the LaGrange points. The station at the LaGrange point on the opposite side of the moon is called LaGrange Gamma. This is where all the trouble began. The station was equipped with the latest Intellicomputer, the "Dire 51". This system was touted as having the highest level of intelligence ever in a super system.

But Dire 51 seemed to be too smart for Earth's own good. Before long, Dire 51 had decided to become ruler of the Solar System. While all the top scientists of Earth were studying the problem with Dire 51, this dangerous system was taking over LaGrange Gamma and preparing for all out war.

Meanwhile, Dire 51 had developed a new type of Armed Armor, which was fully equipped for battle and began its attack on Earth. Even though Earth's forces are strong, the sides seemed to be even. To battle Dire 51, the leaders of Earth decided to send in the MUSHA team.