Garou: Mark of the Wolves/Rock

Rock Howard (ロック・ハワード) is the biological son of Geese Howard but raised and taught how to fight by Terry Bogard. Rock has the skills of both Geese and Terry making him a tough opponent offensively and defensively though, he hates Geese. 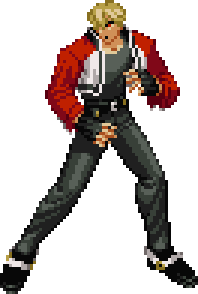 Rock is the son of the most noteworthy crime lord--and most feared fighter--in all of Southtown, Geese Howard. Since Geese never acknowledged him, Rock was raised solely by his mother, Marie Heinlein. When Rock was barely eight and a half years old, Marie contracted a fatal disease, and died while in Rock's care. When Geese is defeated by Terry Bogard on top of Geese Tower, he refuses Terry's help and falls to a presumed death, Rock now having lost both his parents. It is unknown whether through Geese's wishes or his own realization, yet Terry adopts Rock and takes him under his wing.

As the years go by, Rock becomes a formidable fighter, due in no small part to having been trained by Terry. Approximately ten years after Geese's death, Second Southtown was established. During this time, a new King of Fighters tournament dubbed Maximum Mayhem, which Rock and Terry both decide to join. By the end of the tournament, Rock finds his final opponent is Kain R. Heinlein, who reveals himself to be its host and Rock's uncle. Upon winning, Rock discovered that the tournament was orchestrated by Kain to bring Rock to him. Kain, aware that Geese Howard's will held presumably valuable secrets, but unable to discover them without assistance, won Rock's aid in working through the document by offering information regarding Rock's mother--whom Kain claimed was still alive. Terry accepts Rock's decision to become Kain's new partner, with Rock promising to return.