Garou: Mark of the Wolves/Hotaru

Hotaru Futaba (双葉ほたる) is a young girl who searches for her brother with her pet marten, Itokatsu. Even though she knows Kung Fu, she hates fighting. 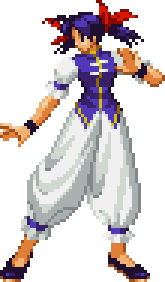 Hotaru is the daughter of a family of martial artists, but is not very fond of violence. She never wants to hurt others, which is the probable reason why her father taught her the lighter side of Chinese kenpo; the Juu-kei style, which suits her easygoing personality. There are two things that Hotaru appreciates the most after her mother's suicide: her ferret, Itokatsu, and her older brother, Gato. But Gato was a man who was tormented to become an accomplished martial artist, and was pushed too far by their father. Still,

Hotaru knows who the real Gato is, and she is sure that he is not such a bad person at heart. Gato's disappearance led Hotaru to a hostile city located in the United States: Second Southtown, where fighting rules all, crime rules the society, and strength dictates who lives and dies. In this harsh place, Hotaru set out to find clues about her brother. She then heard news of a fighting tournament of epic proportions that would soon occur in Second Southtown - "King of Fighters: Maximum Mayhem." Hotaru had a feeling that her brother would enter the tournament, as he was always looking for strong opponents to fight. Following her premonitions, Hotaru entered the tournament as well.

In her ending, she tracks Gato down only for him to deny that he is her brother. She slaps him after he yells at her. Gato smiles and says "Same as always", then he proceeds to leave Hotaru, who prays for her brother.