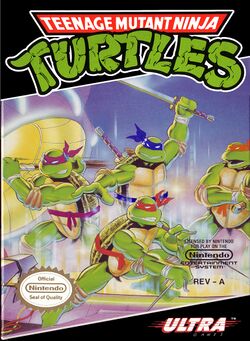 Teenage Mutant Ninja Turtles is an action platform game for the NES released by Konami. In North America it was published under Konami's Ultra Games imprint in the US and the equivalent PALCOM brand in Europe and Australia. Alongside the arcade game (also developed by Konami), it was one of the first video games based on the 1987 Teenage Mutant Ninja Turtles animated series, being released after the show's second season.

The Turtles' first appearance on the NES followed the fighting foursome as they attempt to defeat the evil Shredder. Featuring challenging platforming elements and open-world levels, the game quickly became one of the NES's best-selling titles. Based on the Teenage Mutant Ninja Turtles license and taking cues from the 1987 animated series, it is a single-player game in which the player can switch freely between the four turtles at will.

The box art to the game is taken from a reprint of Eastman & Laird's Teenage Mutant Ninja Turtles #4 Vol. 1, which depicts all four turtles wearing red headbands. The original comics were in black and white so there was little reason to give each turtle differing colors. The full cover has Donatello swinging his Bo at an alien named the Utrom, which was used as the basis for Krang in the classic cartoon. The image was cropped so consumers who were more familiar with the cartoon would not get confused by it.

The game was released for the Family Computer (or Famicom) in Japan a few months earlier than the American NES version under the title Geki Kame Ninja Den (激亀忍者伝, Geki Kame Ninja Den? "Legend of the Radical Ninja Turtles") This was the first T.M.N.T. product released in the country, predating the Japanese dub of both the first film and the animated series. Subsequent T.M.N.T. video games released in Japan kept the franchise's original title. While graphics and gameplay are virtually identical to its NES counterpart, the Japanese localization changed the plot a bit by turning April O'Neil from an acquaintance of the Turtles into Splinter's daughter.

The game was released as Teenage Mutant Hero Turtles in all European territories. The Australian version was released with the series' original title, with the same cover art but on a grey background. The game was ported to various home computer platforms in 1990, including the Commodore 64, ZX Spectrum, Atari ST and Amiga. The game was the UK's number 1 selling Spectrum game for 6 months in 1991. The DOS and Amiga versions are infamous, as they contain a gap that is impossible to cross without cheating or a glitch. It was later released on the Wii's Virtual Console in 2007 as the first licensed game to appear on the North American and European Virtual Console. Due to licensing issues, it was later removed from the Wii Shop Channel in all territories in January 2012.

The Ninja Turtles (Leonardo, Raphael, Michelangelo, and Donatello) are on a mission to retrieve the Life Transformer Gun from Shredder, a device that could restore their sensei Splinter back to his human form. The game's story begins with Shredder, Bebop, and Rocksteady having kidnapped April O'Neil. The initial motivation for the turtles is to come to her rescue, but as the game proceeds, the turtles must foil further plans including the attempting destruction of a dam and the abduction of their master, Splinter.

Out of the Shadows · Mutants in Manhattan