Gothic II: Night of the Raven 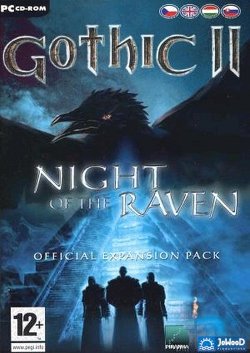 Gothic II: Night of the Raven is an add-on for Gothic II, released in Germany on August 21, 2003, and later in other languages. While it included subtitles in a number of European languages (including English) it was not until its inclusion in Gothic II Gold Edition that some of these languages received localised voiceovers.

Night of the Raven adds a new questline to the game and inserts new sidequests throughout the game world. There are also numerous tweaks to stats, items and enemies, making the game much harder. Because of these significant changes Gothic II saves are not compatible.