Save Your Game
A single touch of the ghouls in the Realm of the Dead will kill Alexander, so you should save your game as soon as you arrive.

Welcome to the Realm of the Dead: hopefully you won't be staying here long. Watch your step: as noted in the sidebar, the ghouls that wander around are deadly to living flesh, and a single touch from them will make Alexander's visit far more permanent than you'd like. 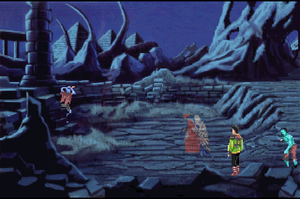 Talk to the ghosts of King Caliphim and Queen Allaria to get a ticket.

Once you arrive, you'll see two ghosts pacing together in the center of the screen: TALK to them. It turns out that they're the ghosts of King Caliphim and Queen Allaria, the former rulers of the Land of the Green Isles. Queen Allaria will tell you that they didn't come here by natural means: the vizier murdered them both in their sleep. Clearly he's been planning to seize power for a long time.

Alexander will tell them that he plans to return them to the land of the living, somehow, and Queen Allaria will automatically give Alexander her ticket into the inner Realm [1]. It's time for you to move on: go one screen east, making sure to keep avoiding the ghouls. 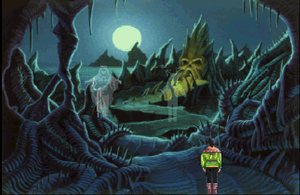 Talk to the mother ghost and get her handkerchief.

On the next screen, you'll see another mournful spirit: you should ask her what's wrong. TALK to the spirit, and she'll tell you that her son, Ali, is lost somewhere in the land of the living, and doesn't know how to find her. When you ask how you can help, she'll automatically give you her handkerchief [1], which her son can use to find her. You'll have to look for her son when you get back...that is, IF you get back. Your journey only gets more dangerous from here. Walk down to the gate in the shape of a skull: that's the entrance to the inner Realm. 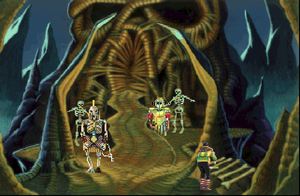 Whoa, how did I just die??!! All I did was walk from one screen to the next! Don't worry: you're not dead (yet). Unless you've been following this walkthrough flawlessly, you've probably encountered this screen before: it's the game over screen. In fact, that screen had a clue for you all this time, which you probably didn't realize until now. When Alexander dies, he has to give the gatekeeper a ticket to enter the inner Realm of the Dead. Even though you're still alive, you also need a ticket to pass. The ticket that Queen Allaria gave you is literally just the ticket.

Don't Forget
If you don't get the skeleton key here, you can't finish the game.

There's one other thing you need to do here, though. The guard has a large keyring on his belt, and a very prominent key on it. A skeleton key could be very useful to you in your quest, so you should probably take it. But it's doubtful that the guard will just give it up: you need to get him to let go of it, somehow.

Hmmm, what's that pile of bones in the corner look like? Of course: a xylophone! As a prince of Daventry, Alexander got a surprisingly broad musical education: not only can he play the flute, but he's also quite an accomplished percussionist. Use the HAND on the bone xylophone to play it [2]. Alexander will play a catchy tune that gets all the skeletons dancing, even the guard. As the guard dances, the skeleton key will come loose and fall to the ground. After Alexander finishes playing, use the HAND on the dropped key to pick it up [1]. Now that you have the skeleton key, you're ready to proceed. USE the ticket on the ticket taker [3], and go into the inner Realm of the Dead. 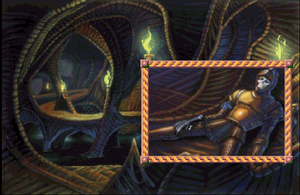 You've made it into the depths of the Realm of the Dead. Again, watch your step here: if Alexander falls into the River Styx, he'll meet a cold and quick end.

This is interesting: there's the long-dead corpse of a knight on the path. Could this be the knight the Druids told you about, the one who attempted to challenge the Lord of the Dead? If so, his corpse could yield a valuable clue. LOOK at the corpse to see an inset view of the body. That's an interesting-looking gauntlet he has, and the writing is strange. Perhaps that's the key to challenging the Lord of the Dead. Use the HAND on the gauntlet to take it [1], and then continue down the path. 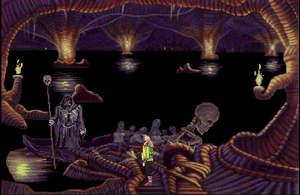 Use the teacup on the river, and then use the coins on Charon.
Don't Forget
Unless you collect the River Styx water here, you can't finish the game.

You're now at the base of the River Styx, and Charon is here with his boat to ferry souls across to the Lord of the Dead. Charon doesn't care much whether the living or the dead take his boat, but everyone has to pay the fare before they can cross. Before you pay, though, there's something very important you need to get here. The Magic Paint spell calls for River Styx water, and you happen to be right next to the only source of that water you're likely to find. USE the teacup on the river [1], and collect the River Styx water for your spell. You now have all the ingredients you need to cast the spell: all you need is a paintbrush. But your spell book won't do you any good here: you need to get back to the land of the living first.

Now that you have the River Styx water, you're ready to board the ferry. Don't worry about the fare: you already have it. Remember the coins from the skeleton in the Catacombs? Those coins were meant to pay Charon's fare, and now they'll be used for exactly that purpose. USE the coins on Charon [3], and he'll ferry you across the river. 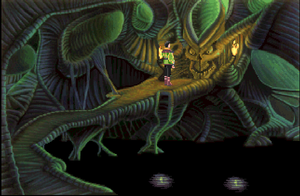 Talk to the gate to answer its riddle.

You're almost to the Lord of the Dead: all you have to do is pass through the gate to his throne. Use the HAND on the gate to go through, and...ZOUNDS!!! That's no ordinary gate: it's some kind of creature! And it seems to be very eager to have you for dinner, and not as its guest.

You need to see if you can reason with it. TALK to the gate, and it will offer you a challenge. If you solve its riddle, it will let you pass. If you fail, it eats you. You'd better hope the riddle isn't too difficult. The gate will pose the following riddle: 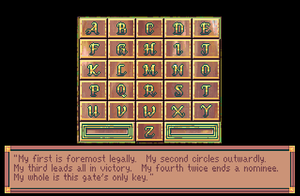 Use the keypad to answer the riddle.

My first is foremost legally.
My second circles outwardly.
My third leads all in victory.
My fourth twice ends a nominee.
My whole is this gate's only key.


As it happens, this riddle isn't all that tough: the clues are all references to letters of the alphabet, and the answer is a 4-letter word. But you've actually seen the answer to this riddle before. Remember the scrap of paper in the Black Widow's web from the Isle of Wonder? It was the answer to a riddle from the rare book, but the riddle was missing. In fact, the missing riddle is the gate's riddle, and the answer is Love. Use the keypad to enter the word "LOVE" [3]. The gate will be furious, but will grudgingly let you pass. Go through quickly, before it changes its mind.

Challenging the Lord of the Dead[edit] 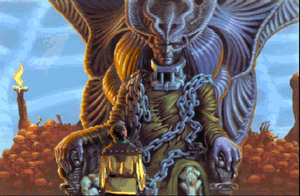 Use the gauntlet on the Lord of the Dead to challenge him.

The Lord of the Dead will be infuriated that a mere mortal dares challenge him, and will give you a particularly impossible challenge. Your challenge: make him, a being who's literally seen it all, cry. That is a tall order: the Lord of the Dead has seen all manner of suffering and pain, and never once shed a tear. That sort of challenge would make lesser men give up. But Alexander has a trick up his sleeve. 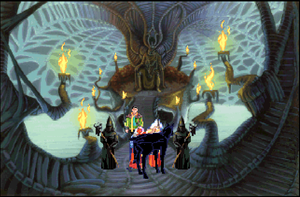 After you successfully challenge the Lord of the Dead, Night Mare will transport you, King Caliphim, and Queen Allaria back.

Having been bested, the Lord of the Dead will allow you, King Caliphim, and Queen Allaria to return to the Land of the Green Isles. As he'll remind you, though, you will be returning to his kingdom someday. Hopefully that'll be later rather than sooner. In the meantime, the Lord of the Dead will summon Night Mare to take the three of you back, and you'll return to the Isle of the Crown.