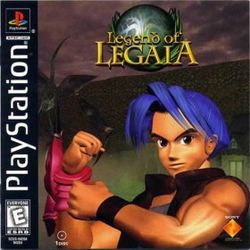 Legend of Legaia is an Role-Playing Game developed by Contrail and released for the PlayStation in 1998. It consists of a turn-based battle system with a unique combo and summoning system. The story is unlike other Role-Playing Games of its era.

In a world where humans cower in fear of the Mist, which brings with it the beastly Seru, Vahn trains to become a hunter. But when his home town is attacked the great wall that protects it comes down, Vahn must joins forces with a Ra-Seru to protect his family and friends. This fusion between the two sparks a new quest to save humanity from evil.