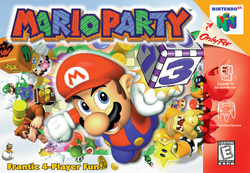 Mario Party (マリオパーティ, Mario Pāti?), sometimes called Mario Party 1 or Mario Party 64, is a party video game for the Nintendo 64 game console, developed by Hudson Soft and published by Nintendo. It was released in Japan on December 14, 1998, followed by a North American release on February 8, 1999, and a European release on March 9, 1999.

In May 1998, Nintendo and Hudson began a partnership to design and develop games together for the Nintendo 64. Mario Party was the first of the games that the partnership released.

Consisting of 50 mini-games, Mario Party takes the form of a traditional board game, with players taking turns to roll the dice block and move ahead the number of spaces shown. There are many different types of spaces players can land on, each producing a different effect. The primary objective of the game is to collect more stars than any other player. The winner of the game is the player with the most stars after all the turns have been completed.