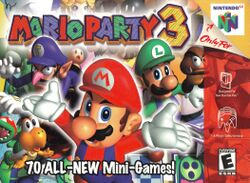 A star is born: In the center of the vast universe, a remarkably bright star was born. It was the star that is born only once in a thousand years, the Millennium Star. According to the legend, whoever possessed the mystical star was destined to become the Superstar of the universe. However since the Millennium Star was but a newborn, it fell from the starry sky.

Suddenly, the Millennium Star gave off a brilliantly bright flash of light. And with that bright flash, Mario and his friends were transported into a toy box.

Greetings. I am the Millennium Star. You must pass my test to prove yourself worthy of possessing me. You must journey across many lands and collect the Star Stamps. If you can collect all seven, I shall except you as the top Superstar in the universe.

Who will collect the seven Star Stamps and become the universe's top Superstar?