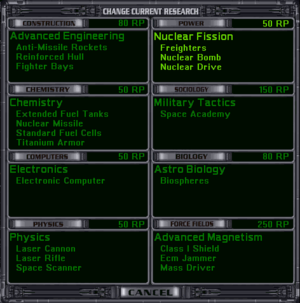 The Computer techs appear in the third row of the left column in the Research Menu.

None. You have to research all the Computer techs if the game starts at Pre-Warp.

Targeting computer that increases beam weapons' chances of hitting by +25. In practise not noticeably better than no computer. If the computer is destroyed, its bonus is lost.

Building that increases a colony's research by a flat 5 RP plus 1 RP per scientist.

Targeting computer that increases beam weapons' chances of hitting by +50. Not cumulative with other computers.

Achievement that makes missiles whose target retreats or is destroyed redirect themselves at the nearest enemy ship or base instead of self-destructing. Can increase the effectiveness of your missiles by up to 25% in the early game.

Best choice for non-Creatives: Research Laboratory is essential - if you fall behind in research so early in the game, you're dead (unless you're a blitzer in a small galaxy and you get lucky).

Achievement that gives a +10 bonus for both Spies (espionage and sabotage against other empires) and Agents (your bumbling fools heroic counter-intelligence operatives).

Ship Special System that generates RPs depending on the ship's size (RPs = 1, 2, 4, 8, 16, or 32; the 16 and 32 are for Titan and Doom Star ships, which you can't build until you get the relevant techs), and gives a special attack bonus if fighting Space Monsters or the Guardian. There are much better ways to increase research and to get attack bonuses that work against other empires as well as against Space Monsters or the Guardian.

Ship Defense System that improves defense against boarding parties by +20 to Marine Defense on a ship or base.

Best choice for non-Creatives: Neural Scanner; espionage and sabotage are potent weapons in the early game, when warships are slow and weak. Particularly essential for Democracies, which are weak in counter-intelligence.

Building that increases a colony's research by a flat 10 RP plus 2 RP per scientist.

Building increases a colony's morale by +20%, which improves all of farming, industry, research and income. See Strength through Joy for an example of how useful a Holo Simulator can be.

Best choice for non-Creatives: usually Supercomputer; the large boost in research early on may be decisive. However, blitz races may choose positronic computer if they are in a good position for an offence. If research is important to you at this stage of the game, only consider Holo Simulator if you are very short on cash and are Subterranean.

Of course, you may be of the mindset that all research provides only a temporary advantage as it will eventually be taken through spies, trade or conquest. All of your hard work on research is liable to be taken away to give everyone else an advantage and deprive you of the opportunity cost of more colonies, buildings and conquest. You probably won't be assigning any colonists whatsoever to research and will have a massive spy network, even if you still build research buildings for some automatic RPs. You probably already have stolen Supercomputer by now anyway.

For Creatives this tech level is the "end of the beginning". Colonies with four or more scientists should if possible stockpile production so they can build a Supercomputer immediately and a Holo Simulator on the next turn. Colonies that are going to build warships should usually omit the Supercomputer and build the Holo Simulator, then move some workers into research until a Pollution Processor is built.

Achievement that enables you to equip warships with missiles that have the EMG modification, which can be deadly against enemy ships, particularly the Antarans, who have no shields to block EMG missiles.

Ship Special System that improves "beam" weapons' chances of hitting at long range to the same level that they previously had at one-third of the range.

Achievement that gives a +10 bonus for both "Spies" (espionage and sabotage against other empires) and "Agents" (counter-intelligence operatives).

Best choice for non-Creatives: usually Emissions Guidance System, but Democracies should consider Cyber Security Link to counter their weakness in counter-intelligence. However, the Rangemaster Unit is also great for beam weapons that have no dissipation like mass drivers and disrupters

Targeting computer that increases beam weapons' chances of hitting by +100. Also improves your chances of shooting first if you play with the "ship initiative" option on (see the military sections of this guide for details). Not cumulative with other computers. The first targeting computer that is effective against ships that have a defensive bonus; hardly ever misses against other ships.

Building that produces 30 RP without needing scientists. At this stage of the game it's good on planets with scientists and amazing on planets without (which are probably the majority at this stage); typically increases an empire's research by 50%, sometimes more. When you start researching Autolab, all colonies should if possible stockpile production to build one immediately. You should already have strengthened your finances to handle the maintenance.

Ship Special System that doubles all beam weapon damage that penetrates the target's shields. Deadly when coupled with a good computer and good beam weapons. It's effective against warships, Star Bases, missiles, fighters and ground-based defences (although a planet's atmosphere halves the effective power of beam weapons).

Best choice for non-Creatives: very difficult, as all three techs are extremely desirable. Hardly any can afford to take Structural Analyzer. Those who expect serious combat soon (offensive or defensive) and want to use beams take Cybertronic Computer and must attack quickly before those who take Autolab get a significant lead in technology.

This tech level is Creatives' most important payday - a few later ones may have equally large effects, but this one changes the game for Creatives: Autolabs enable them to research military techs fast (and Stock Exchanges, which they should build as early as possible, to meet the high costs of an invasion campaign); Cybertronic Computer + Structural Analyzer + reasonable beams kill larger enemy fleets fast (beams are best for Creatives because missiles lead to wars of attrition, which Creatives can't afford as they are generally slow at shipbuilding).

Robotic "colonists" that can only farm, but each generates 3 more food than a normal colonist (excluding Natives) in the same environment. Its productivity is not influenced by racial or government bonuses or penalties, but is enhanced by agricultural technologies that have been "built" on the colony. It does not contribute to a colony's cash income. All Androids are Tolerant (see note below).

Robotic "colonists" that can only do industrial work, but each generates three more PP than a normal colonist in the same environment. Its productivity is not influenced by racial or government bonuses or penalties, but is enhanced by construction technologies (both buildings and achievements). It does not contribute to a colony's cash income. All Androids are Tolerant (see note below).

Robotic "colonist" that can only do research, but generates three more RP than a normal colonist in the same environment. Its productivity is not influenced by racial or government bonuses or penalties, but is enhanced by research buildings (but not by the Heightened Intelligence Achievement, see Biology). It does not contribute to a colony's cash income. All Androids are Tolerant (see note below).

Because of these properties the following strategic uses apply:

Best choice for non-Creatives: the one that strengthens your greatest weakness. For example most Unification empires, especially UniTol, will usually prefer Android Scientists. On the other hand most research-oriented races will prefer Android Workers; and cash-rich Democracies can afford to populate small Rich or Ultra-rich planets entirely with Androids, turning them into very powerful shipyards. Android Farmers seem the least useful option in most cases, but cannot be completely ruled out as food is the hardest resource to produce. On the other hand, where Androids shine the most isn't going to be farmable anyway!

Achievement that raises morale on all colonies by +20% immediately and at zero cost. See Strength through Joy for an example of how useful a 20% morale boost can be (the example uses a Holo Simulator; Virtual Reality Network is even better).

Building that increases a colony's research by a flat 15 RP plus 3 RP per scientist.

Best choice for non-Creatives: most go for Galactic Cybernet. However, Virtual Reality Network is also highly viable, since by this stage most colonies are terraformed and bursting with people so increasing all production by +20% immediately with no maintenace costs is a good idea.

And wouldn't your research effort be better off with more than three spies from the PP that the Cybernet would have cost for each colony, net of the lost morale bonus including the ones that don't need to farm anymore? If you've already stolen everything then these decisions are a lot easier, and in some cases you won't have to make one at all.

Building increases a colony's morale by +30%, which improves all of farming, industry, research and income. See Strength through Joy for an example of how useful a morale-boosting building can be.

The best targeting computer, increases beam weapons' chances of hitting by +125. Not cumulative with other computers. Only misses against Battleships or smaller warships that have either a +50 defensive bonus or a Displacement Device; hits anything else almost 100% of the time. Also maximizes your chances of shooting first if you play with the "ship initiative" option on (see the military sections of this guide for details). Note: this is the only computer that the Antarans use.

Best choice for non-Creatives: excruciatingly difficult - non-Creatives should hope the game does not get this far. Considering the situation for non-Creatives, the Virtual Reality Network a tech level back improves morale, is built immediately in all colonies and does not require maintenance. The Pleasure Dome has to be built and has maintenance.

This level is not often reached in competitive games, but it's a huge payday for Creatives, for whom 1 Battleship can sometimes destroy 4 to 6 non-Creative Battleships per combat turn (remember that Creatives also get Structural Analyzer and by this stage probably also have High Energy Focus + Megafluxers; and at least Anti-Matter Drives).

If you get Achilles Targeting Unit, it initially requires a lot of space; miniaturizing it a couple of levels by Hyper-advanced Computers research allows you to add significantly more weapons, with gruesome consequences for your enemies.