Master of Orion II: Battle at Antares/Starting a game

This page tells you how to start a new game. At present it covers only single-player games against AI opponents on your own computer. Start-up instructions for multi-player games depend on the server and "clan" with which you're playing and are not yet covered - hopefully instructions for the major clans will be added later.

Most of the available mods include a separate executable file. It's particularly important to start the right executable if:

If you opted to run MOO II via DOSBox (see Installation) make sure you start the right DOSBox configuration file.

You can skip the splash screens and go straight to the start menu by hitting the ESC key. The start menu's options all have hot keys: 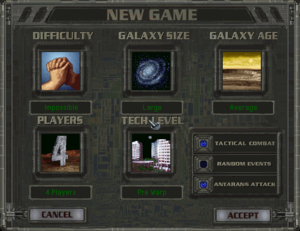 All of the New Game Menu's options work by clicking until it cycles round to what you want - there are no drop-down lists or radio button groups. It asks you to specify:

If you allow random events, the following may happen to any player:

A ship in transit finds a wrecked ship and gets one or two technologies from it.

Teleports one of a ship in transit to the closest of its empire's colonies. Too bad if that's in the wrong direction.

Doubles a colony's population growth for a while.

A wealthy person donates money to an empire's treasury, usually a substantial amount.

Decreases a colony's population by a lot each turn until cured; the more scientists you have working at this colony, the faster a cure is found.

Tilts the axis of a planet to a more favorable or a worse climate, usually to either Terran or Barren.

Increases or decreases a planet's mineral rating, usually by 2 levels up or down.

Pirates raid all freighters in a system, preventing the import and export of food and population. The cure is to station some warships there until the pirates are defeated.

Space Monster (Space Hydra, Dragon, Amoeba, Crystal) will attack a colony, bombard it, and then go away.

A Space Eel, a fairly strong monster, will blockade a colony while it tries to spawn, thus preventing the system from importing or exporting food and population. After about 50-100 turns, the Eel spawns another Eel which goes to the nearest system that is not blockaded by an Eel, blockades it and tries to spawn. This cycle can continue until your whole empire is blockaded. Eels never attack colonies, so you will need to attack them with warships to destroy them.

A Space Monster (usually a Dragon, which is probably the most dangerous monster) demands money. If you give it what it asks, it will attack ANY other colony at your command (make sure you tell it to attack an enemy) and then disappear. Space Monsters travel very slowly between stars, but have unlimited range.

A computer virus infects your systems, which sets your research back a few turns.

Your scientists suddenly have a flash of inspiration and finish researching whatever you are researching, and gives you all other technologies in that category (e.g. a hydroponics farm and biospheres), regardless of how close you are. The closer you are to finishing a research project, the more likely a random breakthrough becomes.

No ship can go anywhere until this has dissipated, except that Trans-Dimensional races are unaffected.

"Freezes" a colony so that nothing can be done there until the flux dissipates. Fortunately the colony doesn't need food while frozen by the flux. Antaran attacks on a frozen colony have no effect.

A space monster will randomly eat a ship passing through hyperspace until it isn't hungry any more.

One of your diplomats tries to assassinate one of another empire's diplomats or even its ruler, and your relationship with that empire deteriorates.

A member of your political élite marries a member of another empire's élite, which improves the relationship between the 2 empires (don't think too much about the physical aspects).

Scientists discover that a system's star will become a supernova in a few turns. To prevent the extinction of all life in the system, assign all available colonists in that system to research.

A comet enters the system and will destroy a colony in that system in a few turns. To prevent this, station a powerful fleet in the system until it destroys the comet.

If you select "Custom Race", you will see the "Select Race Picture" Screen. You have to choose one of the pre-defined race pictures, and you will not meet another empire of that race in the game.

Then you get one of the most important screens in the game, the Race Design Menu. See Race design for more details.

Naming your ruler and home system[edit]

These 2 screens are easy - you can just click "accept" unless you want the Hall of Fame screen to contain a unique ruler name for each entry. The Ruler Name and Home System Name screens have a small bug - the maximum length of the name varies from one game to another and sometimes is as short as 6 characters.

Then you see the game's Main Screen, which is described in Game controls.

When the game starts, your workers are producing nothing and your scientists are researching nothing. If you just click "Next Turn" immediately the game asks you what you want to research and what you want each colony to build - but you've wasted a turn, and that could cause you difficulties, especially in a small or crowded galaxy where you're likely to make contact with opponents very early in the game.