Master of Orion II: Battle at Antares/Diplomacy is scouting

—Sun Tzu, The Art of War

Many strategy game guides say things like "Scout early and keep scouting all through the game" to see what your opponents are doing.

In MOO II your ships can't discover much about your opponents from a distance and, even if they enter a system occupied by an opponent, all they can see is colonies' current and maximum populations, the types of defenses that they have (e.g. Star Base, Missile Base, but not how advanced these are) and the nature, mineral wealth and any special features of planets in the system.

But you can get a lot of more useful information without visiting opponents' systems. It's impossible to produce a comprehensive guide to interpreting this information, because the possible variations are endless. You have to develop your ability to interpret what the relevant screens say - and what they don't say, which is often as important.

So this page presents an example of how much information you can extract from just 2 screens.

Before we get into details, the lesson is: Use the Races (diplomacy) screens to check out all known opponents at least every 4 turns. The example below shows an opportunity. In other cases regular checking may save your empire by warning you of a threat, either military or from Spies. 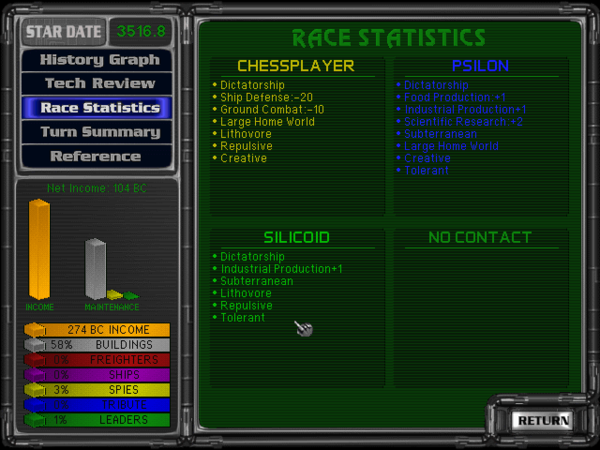 This tab of the Information Screen tells you the advantages and disadvantages of the founding race of each empire with which you have contact. It is accessed from the main Galaxy screen (hotkey I).

The Race statistics tab of the Information Screen is outside the Races Menu (diplomacy) but is very informative. The entry for the Silicoid empire tells us:

There's another item that's important for the example below - it's game date 3516.8, i.e. turn 168. You will more usually get that information from the top right corner of the Galaxy screen, since every turn starts there.

By the way, we're the Chessplayers - check out the race design. 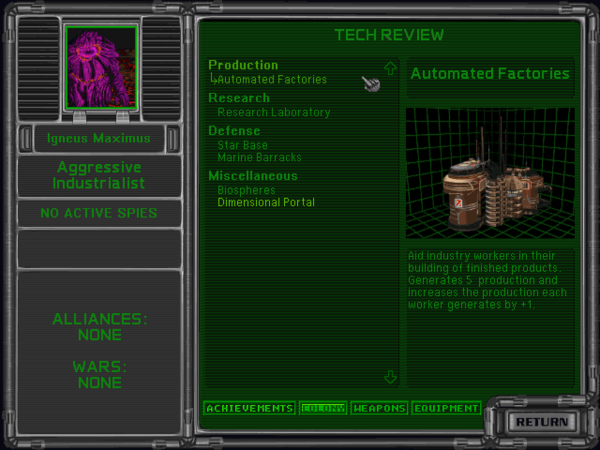 The Report screen is accessed from the Races Menu and gives information about another empire. The large panel on the right tells you what techs the other empire has. There are so many possible techs that the display is split into 4 tabs, each of which is scrollable. This example shows the "Colony" tab, which tells you about techs that help to make this empire's colonies more productive or provide ground-based and orbital defenses for them.

This example of the Report about the Silicoid empire is also from turn 168 of the same game.

The left panel is fairly simple:

In this example the most interesting information is in the "Tech Review" panel on the right:

Now for some interpretation:

Our ships are far better than the best the Silicoids can produce, and it's quite common that over half of an empire's fleet is below its best tech level, because moving older models to shipyard colonies and upgrading them takes time. The most difficult battle we'd be likely to face would be 2 of our 3(!) Battleships (2 now, 1 will be completed in 4 turns) against about 10 of the Silicoids'. Even if all the Silicoids' warships are equipped with Proton Torpedoes we have a better than 50% chance of zero losses:

All these screens also tell us our ground combat techs are far superior in every way; we'll skip the details.

The "Colony" tab told us what to look for, and what we found says loudly and clearly, "Attack now, before they fit all their ships with Proton Torpedoes or get Mauler Device" (a brutal beam weapon that never misses, even if its owners have no computers at all; it's at the next level of the Physics tech tree after Dimensional Portal, and the Silicoids may be researching it now).

As the Silicoids are Lithovores we won't have the burden of feeding any of them, and they're Tolerant, so we can build up the economies of conquered colonies as fast as we like. They're a very inviting target as well as an urgent one.

So we make our non-shipyard colonies build 15 Troop Transports, timed so that the last is completed in the same turn as our 3rd Battleship. Our one obstacle is that at this stage our Iridium Fuel Cells do not give our fleet enough range to reach the Silicoids' nearest colony. We could switch research from Anti-Matter drive to Uridium Fuel Cells, which would provide just enough range, but it would take us 6 turns to get Uridium Fuel Cells. So we make an Outpost Ship, completed in the same turn as our 3rd Battleship; we're gambling that one of 2 unoccupied systems about halfway to the the Silicoids' nearest colony contains a planet, Gas Giant or Asteroid Belt where we can create an Outpost, which will put our ships within range of several Silicoid colonies.

And all this started from analyzing one Race's (diplomacy) screen!