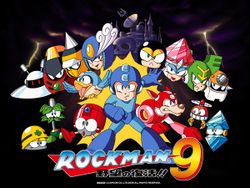 Mega Man 9 (ロックマン9 野望の復活!!, Rokkuman 9: Yabō no Fukkatsu!!?, lit. Rockman 9: The Ambition's Revival!!) is a platform game by Capcom. It is the latest game in the original Mega Man series, and the first numbered entry since 1996's Mega Man 8. Its existence was first hinted through the Australian OFLC ratings board, which listed the title on the site and classified it as multi-platform. The game is currently available for download on WiiWare, PlayStation Network and Xbox Live Arcade.

Using Mega Man and Mega Man 2 as the main inspiration for the title, Mega Man lacks the Power Slide and Mega Buster featured in later games, although the game does feature items such as the Rush Coil, Rush Jet, and Beat. In a downloadable add-on, Proto Man becomes playable and is able to slide and charge up his buster. The game features several Challenges that require certain requirements to be met to be completed. Other features include a Time Attack mode and a shop where Mega Man can purchase items such as E-cans, as well as bonus options like removing his helmet.

Mega Man's creator Dr. Light is blamed for a robotic rampage and Dr. Wily himself has no apparent connection to it (even showing a video of Dr. Light declaring world domination and Dr. Wily refusing to follow him), announcing that he needs donations to complete the robots he created to combat those of Dr. Light. Mega Man must fight to prove his creator's innocence and expose Wily's true intentions.