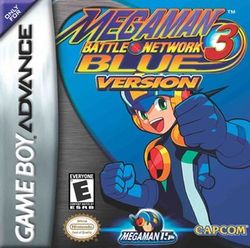 Mega Man Battle Network 3 (バトルネットワーク ロックマンエグゼ3, Batoru Nettowaaku Rokkuman Eguze Suri?, Battle Network Rockman EXE 3) is the third game in the Battle Network series. It was originally released in Japan as a single version. In North American and Europe, a Blue and White version were simultaneously released. In Japan a Black version was released that featured new areas, bosses, and other improvements. Each game, including the story, is significantly different than the other.