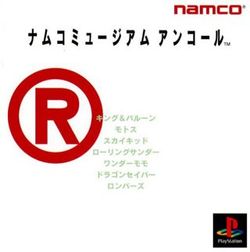 Namco Museum Encore was an additional compilation disc that Namco made for the PlayStation. This version was not initially planned and was only released in Japan due to the success of the original five volumes. Each game is reprogrammed for the PlayStation, not emulated, and allows you to adjust the dip switches as they were found on the actual arcade machines. Games that were played on a vertical monitor can be played in its original ratio if you are willing to turn your TV sideways. This volume contains the following games: