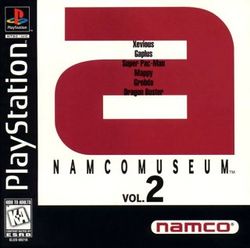 Namco Museum Vol. 2 is the second of five compilation discs that Namco made for the PlayStation. In addition to a selection of games, each disc includes a virtual museum where you can view images of promotional items, circuit boards, sprites, and other items, as well as a decorated room which contains a cocktail version of the game that you can activate to launch a game. Each game is reprogrammed for the PlayStation, not emulated, and allows you to adjust the dip switches as they were found on the actual arcade machines. Games that were played on a vertical monitor can be played in its original ratio if you are willing to turn your TV sideways. This volume contains the following games:

The Japanese version of this volume does not contain Super Pac-Man. Instead it contains one of Namco's earliest games, Cutie Q, as well a hidden game Bomb Bee, both from 1979.