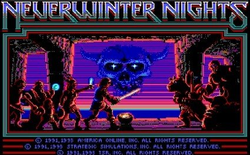 Neverwinter Nights was the first MMORPG to display graphics, and ran from 1991 to 1997 on AOL (then called Quantum Computer Services). The genre had previously been pioneered by the all-text Islands of Kesmai series created by Kelton Flinn at Kesmai.

In addition to being the first graphics-based MMORPG, the game also marked the first appearance of online Clans and Player versus player combat in multiplayer RPGs.

Neverwinter Nights was followed by a series of progressively more successful graphical MMORPGs, including Shadow of Yserbius (1992–1996), Ultima Online (1997–present) and EverQuest (1999–present). By 2000 the category was well-established and multiple titles began to appear in North America and in Asia.

NWN is the predecessor to BioWare's 2002 game Neverwinter Nights.

Screenshot of Neverwinter Nights on AOL.

Neverwinter Nights was a co-development of AOL, Stormfront Studios, SSI, and TSR (which was acquired by Wizards of the Coast in 1997).

Don Daglow and the Stormfront game design team began working with AOL on original online games in 1987, in both text-based and graphical formats. At the time AOL was a Commodore 64-only online service, known as Quantum Computer Services, with just a few thousand subscribers, and was called Quantum Link. Online graphics in the late 1980s were severely restricted by the need to support modem data transfer rates as slow as 300 bits per second (bit/s).

In 1989 the Stormfront team started working with SSI on Dungeons & Dragons games using the Gold Box engine that had debuted with Pool of Radiance in 1988. Within months they realized that it was technically feasible to combine the Dungeons & Dragons Gold Box engine with the community-focused gameplay of online titles to create an online RPG with graphics. Although the multiplayer graphical flight combat game Air Warrior (also from Kesmai) had been online since 1987 [1], all prior online RPGs had been based on text.

In a series of meetings in San Francisco and Las Vegas with AOL's Steve Case and Kathi McHugh, TSR's Jim Ward and SSI's Chuck Kroegel, Daglow and programmer Cathryn Mataga convinced the other three partners that the project was indeed possible. Case approved funding for NWN and work began, with the game going live 18 months later in March of 1991.

Daglow chose Neverwinter as the game's location because of its magical features (a river of warm water that flowed from a snowy forest into a northern sea), and its location near a wide variety of terrain types. The area also was close enough to the settings of the other Gold Box games to allow subplots to intertwine between the online and the disk-based titles.

The game originally cost USD$6.00 per hour to play. Some users bragged about monthly game bills of $500 or more. As the years progressed, Internet connection costs dropped, AOL and NWN membership grew, the servers became faster and the hourly player charge declined. As a result of these upgrades, the capacity of each server grew from 50 players in 1991 to 500 players by 1995.[2] Ultimately the game became a free part of the AOL subscriber service.

The original Neverwinter Nights was expanded once, in 1992 [4]. At about this time AOL’s subscriber growth started to expand exponentially, as the adoption of e-mail by everyday Americans drove new sign-ups. AOL diverted all its efforts into keeping up with the exploding demand for modem connections and online capacity. All game development at AOL other than NWN was suspended, and the game's player capacity was enhanced through server-side improvements but not through the addition of new playable areas. Nevertheless, the original game remained one of AOL's most active areas until a disagreement arose between AOL and TSR over future rights to the game. Thousands of dedicated NWN players rose in protest, some in national media, but to no avail. [5] The gates of Neverwinter were closed in July 1997. [6]

Much of the game's popularity was based on the presence of active and creative player guilds, who staged many special gaming events online for their members. It is this committed fan base that BioWare sought when they licensed the rights to Neverwinter Nights from AOL and TSR as the basis for the modern game. [7]

NWN gained incidental media attention from AOL tech and marketing staff by appearing in the Don't Copy That Floppy campaign by the Software Publishers Association.

Player vs Player combat was very popular but not necessary. Singles and Doubles Ladders contained over one hundred competitors. Many guilds participated in the Great Wars which pitted three quad teams from a guild vs another guild. A quad team would play each quad team from the other guild and the winning guild was the best of 9. The guilds progressed through an NCAA-like tournament to reach the final champion. One of the major drivers for PvP's popularity was the amazingly balanced combat system that provided a chess like turn based combat system which incorporated NPC (non player character) manipulation and a limited number of power spells . There were innumerable strategies based on trying to maximize the effectiveness of when to use the power spells (such as a Globe - protection from spells under level 3, mirror image - which could not be cast if you were globed but when cast created between 1 and 4 duplicate copies of yourself which could shield against any non-area effect spell, or cause critical wounds which would knock between 5-30% of the hitpoints from the enemy if you didn't hit a duplicate copy of the enemy). The iterations of these and many other spells made NWN PvP arguably the most skill-based strategic PvP engine ever created in the online world to this day.

Differences between versions of Neverwinter Nights[edit]

There is one known version of that game for MS-DOS:

Almost a decade after the game's run ended at AOL, online sites allow players to experience the original NWN: