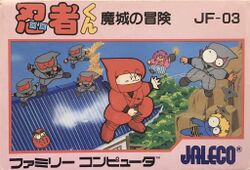 Ninjakun (忍者くん魔城の冒険, Ninja-kun Majō no Bōken?, lit. Little Ninja Adventure at Demon Castle) is a ninja action arcade game that was only released in Japan. It employs a cute artwork style and features the player as a red clad ninja facing an army of enemy ninjas and demons. The player must defeat each and every enemy in a stage in order to advance to the next stage. Each stage takes place in a vertically scrolling mountain or castle, and the player and enemies jump and fall between different levels. Ninjakun was ported to the Famicom and MSX systems. The Famicom conversion was done by Jaleco, who produced a Famicom only sequel Ninja Jajamaru Kun which was released for the Wii Virtual Console in Japan. UPL produced an arcade sequel known as Ninja-Kid II, which they ported to the Famicom as "Ninja-kun Ashura no Shou".

Ninjakun is on a mission. He alone must climb the mountain and enter Demon Castle and clear out its evil inhabitants. He will face enemies along the way, and must eliminate them before he can progress to the second mountain, and on to the castle. When he succeeds, he must start over at the bottom of the mountain against a tougher group of foes.