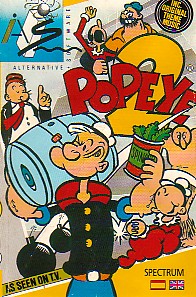 Popeye 2 is platform game that had initially been developed by Bizarre Developments for Alternative Software and released on the Sinclair ZX Spectrum, Amstrad CPC, and Commodore 64 in 1990, and was later redeveloped by Quex Development for the Commodore Amiga in 1992.

This is from the back of the cassette's (or disk's, in the case of the Commodore Amiga version) inlay card, the front of which is shown in the image to the right (Popeye is holding a beer keg in one hand and spinach can in the other, surrounded by Olive Oyl, Brutus, Mr. Wimpy, Eugene and Swee'Pea):

Popeye must free Olive Oyl, who has been captured by Brutus in a
desperate bid to win her affection. Armed with muscle and courage,
fortified with spinach, Popeye must pursue Brutus through many
hazardous locations, battling with numerous foes and dangers. On his
way Popeye will meet several of his friends who will either help him
or hinder him.

Wimpy: Will stop Popeye. He has lost his hamburgers. Can Popeye help
him collect them all?
Swee'Pea: Is crawling dangerously close to the edge of girders,
platforms, etc., unaware of the drop below. Popeye must stop him
quickly.
Eugene the Jeep: Will help Popeye with extra points when Popeye
passes him.
Goons: Watch out! They are spoiling for a fight; don't let them knock
out Popeye's lights. Help Popeye catch the cans of spinach in order to
get past.
Brutus: When Popeye reaches Olive Oyl he will have to fight it out
with Brutus. He will need all the spinach he can get. Be warned,
Brutus is a tough cookie and doesn't fight fair; he also carries a
dirty great big club!
© King Feature Syndicate Inc. 1990