Developed by Software Studios and published by Electric Dreams Software in 1988. In an unusual move, this version was ported from ZX Spectrum conversion, as opposed to the other way around which was more common. As a result, this game does not make the best use of the available hardware and is considered a lackluster conversion (whereas the ZX version was hailed as remarkable.)

A 128K full color remake is being created by Easter Egg to be released in 2012, 25 years after the original, with 16 colors sprites and maps, converted from the arcade graphics, starfields, animated background, parallax scrolling and more. It includes a special mode for casual gamers to make it easier to play. 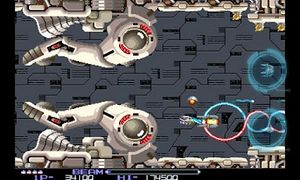 Ported from Electronic Art’s iPhone version by Worker Bee, and distributed in North America by DotEmu in September 12, 2011. 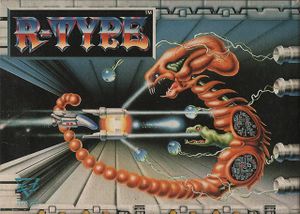 Developed by Software Studios and published by Electric Dreams Software in 1988. While close in visual quality to the arcade game, the scrolling in this version is not as smooth as it could be. For unlimited lives, enter SUMITA on the high score screen. 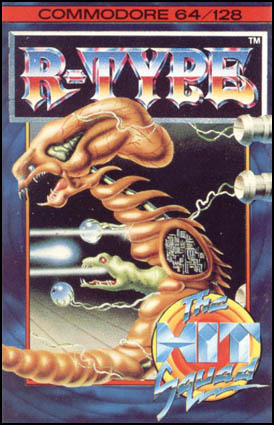 Developed by German game development company Rainbow Arts and published in Europe by Electric Dreams Software in 1989. Activision was responsible for publishing the game in the U.S. Due to the age and limitations of the hardware, this conversion is considered quite poor. Many enemy behaviors or movements were simplified. It appears to skip Stage 6 entirely. Chris Hülsbeck was responsible for the arrangement of the introductory chiptune. It was originally sold in the same box art as the other home computer versions. The box art shown to the right was for the re-release. For unlimited lives, enter SUMITA on the high score screen.

Developed by Factor 5 and published in Europe by Electric Dreams Software in 1989. Activision was responsible for publishing the game in the U.S. This conversion is generally considered very good and fairly accurate to the arcade. The development team was the same as the team who did the Commodore 64 conversion for Rainbow Arts before they split off to become Factor 5. They were hired to do the conversion after releasing a similar horizontally scrolling shooter game to the German demo scene, which became the game known as Katakis. As a result, both games share a similar engine. Chris Hülsbeck was responsible for the arrangement of the introductory chiptune.

Developed by Bits Studios and published by Irem around the world in 1991. Stages 4 and 5 have been removed in order to make the game fit on cartridges, resulting in six total stages. Many of the background music arrangements were removed as well. As secret menu of options can be opened by pressing

on the main menu.

In 1999, the remake R-Type DX was released on Game Boy Color, compiling R-Type and R-Type II on one cartridge, and adding color. 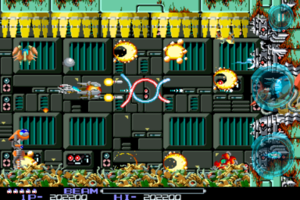 Developed by Electronic Arts and published on the Apple App Store on August 26, 2010. Very faithful to the original arcade game. Chris Hülsbeck, who was responsible for the arrangement of the introductory music on the Commodore 64 and Amiga games, was hired to compose a new opening theme for this version as well. All of his R-Type compositions were then released on iTunes the same year. 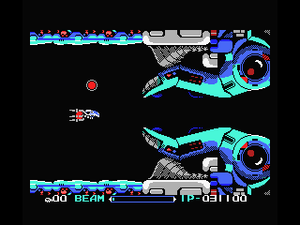 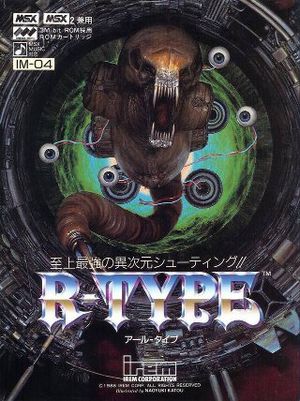 Developed by Opera House under the supervision of the original arcade game staff, and published by Irem in 1988. Because it was coded to work with all models of the MSX, the game background does not scroll smoothly, like many scrolling shooters for the system. Sprites are only used for a few objects while the rest is drawn into the background so that they scroll evenly with it. However, some visible improvement is displayed when running on the MSX2, particularly the color pallet. A bug prevents the game from recognizing the MSX-MUSIC sound module if it is built directly into the hardware instead of being plugged in as a cartridge. 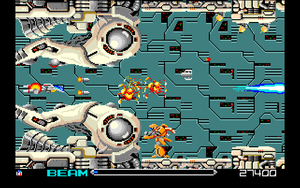 Developed by Telenet Japan, and published by NEC in 1989.

Developed and published by Hudson Soft. It was the very first home conversion of R-Type released. However, the initial release of this conversion was split into two parts, as the HuCards that the game was published on only contained enough memory for four stages. The first four stages were released as “R-Type I” on March 25, 1988, and the last four stages were released as “R-Type II” on June 3, 1988. Upon completing R-Type I, the player receives a password which allows him or her to begin R-Type II with the same level of power and score that the player possessed upon clearing the fourth stage. When the game was released in the United States on the TurboGrafx-16, all 8 stages were included on one card. Because the bottom portion of the screen was reserved for the score and Wave Beam meter, the game scrolls very slightly when the player flies near the top or bottom of the screen. Despite all of these changes, the conversion is remarkably close to the original arcade game. One major game play change is the addition of a new boss at the end of Stage 6. To receive extra credits for continues, set the turbo switch for I to full. Then, hold

on the title screen and press 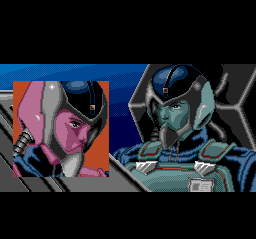 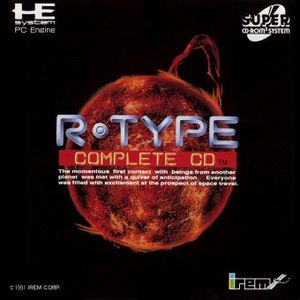 Released in Japan on December 20, 1991, Irem took the separate conversions of R-Type I and II, and compiled them together on one disk entitled “R-Type Complete CD.” No significant gameplay changes were made from the HuCard adaptations; the original boss in Stage 6 still appears. However, new background music arrangements were provided, and animated cut scenes were included between stages. The cut scenes tell the story of how the R-9 is being developed for use by the army when the Bydo empire attacks. Two skilled pilots use the R-9a prototype to beat back to the Bydo offensive until the remaining ships are available to join the assault. Voice actors were hired for the production, a practice which had not yet become common like it is today. While the Super CD-ROM2 hardware provided slightly improved processing ability to the system, sprite flicker is still noticeable on some occasions, particularly with the boss of Stage 5.

Developed by Compile, and published in Sega in 1988, this 8-bit conversion is considered one of the most remarkable remakes of the game ever made. Despite being produced on a system whose specs are much lower than the original arcade, this conversion manages to capture every major element of gameplay, and even adds a secret bonus stage, all within 4 Megabits of memory. The fact that every stage was contained on a single release was used as a selling point over the otherwise graphically superior PC Engine version, which was split into two parts. Due to the weaker graphics processing of the system, which was on par with the NES and MSX2, many sprites were reduced in size, and backgrounds disappear whenever bosses are presented. However, recreation of the game’s sounds is given a boost by the system FM sound modulator. Because the game was released in Japan roughly one month ahead of Sega’s Mega Drive (Genesis) system, this conversion was largely overlooked.

Secret Level
In Stage 4, look for the two columns that occupy the space above the large field of green dots. Fly into the space between the two columns, and then fly backwards into the left column to warp to a bonus stage. It has its own enemies and a unique boss. Note that if you die at any time in this level, you will return to Stage 4.
Sound Test
On the continue screen, rotate

in a counter clockwise direction until the sound test screen comes up. Inputing 00 will return you to the continue screen. If

is held while choosing the various sounds, sounds 01 to 95 are available.
Extra Continues
On the continue screen, rotate

in a clockwise circle to get free continues. Keep going in circles until time is about to expire, then hit

. This can earn you up to 12 continues. You don't have to get all 12 in one try. When those are expired, rotate the pad counter-clockwise to bring up the sound test. Hold

and go right to sound 62. Play it 3 times then exit the test. Then resume the clockwise circles to earn more continues. After getting 30 more, you will need to replay sound 62 3 times again to get more. 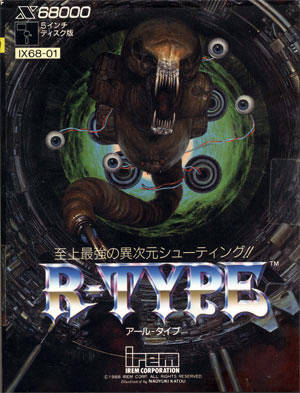 Developed and published by Irem in June of 1989. Like many other arcade conversions for this system, R-Type is near arcade-perfect.

Developed by Software Studios and published by Electric Dreams Software in 1988. There is only one sound channel, and as such, there is no background music. The sprite and background graphics are largely reduced to one or two colors per object. However, despite the reduction in quality from the original arcade, this conversion is considered one of the greatest arcade adaptations that the system has ever seen.