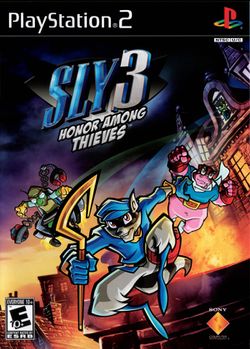 Sly 3: Honor Among Thieves is the third game in the Sly Cooper franchise. The game was released on September 26, 2005 in the United States. Sly 3 has optional 3D stages, and it comes with a pair of specially designed 3D glasses inside the manual. Despite being rated less than the predecessor, the game received generally positive reviews from the gaming press and was as well-reviewed as the original game.

Set one year after the events of Sly 2: Band of Thieves, Sly Cooper and Bentley attempt to open the Cooper Vault on Kaine Island, with the help of mystery people. Unfortunately, they are intercepted by Dr. M, the owner of the island. Sly and Bentley escape, but a monster grabs Sly. During this scene, Sly's life flashes before his eyes, and the game moves back into the past. It is explained that Sly had come to learn of the Cooper Vault hidden on Kaine Island from one of his father's colleagues. The vault contains the accumulated wealth of the Cooper family built up over thousands of years. Sly went to find the vault, only to discover that M had built a fortress on the island in an attempt to get at the wealth hidden in the vault. Sly realizes that he needs a gang of master thieves in order to get past M's extensive security—he needs the Cooper Gang back in action.