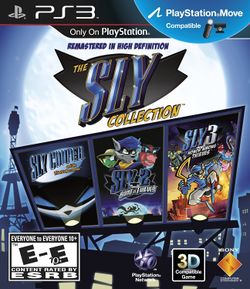 The Sly Collection (titled as Sly Cooper Collection in Japan and The Sly Trilogy in Europe and in some parts of Australia) is a collection of remastered ports of the first three games for the PlayStation 3 on a single Blu-ray Disc as a Classics HD title. The original games were developed by Sucker Punch Productions while the port was handled by Sanzaru Games and was published by Sony Computer Entertainment. The game was released on November 9, 2010.

The Sly Collection is the second remastered collection of PlayStation 2 games with the first being God of War Collection. The Collection updates the graphics, including support for the 3D capabilities of the PlayStation 3, new mini-games that can be played using the PlayStation Move or standard controller and additional title supports such as trophies.