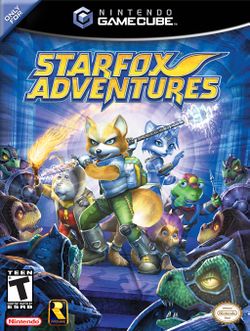 Lylat Wiki has an article about:

Star Fox Adventures is a part of the Star Fox series. It was the last game developed by Rare for Nintendo, before the company was acquired as a first-party developer for Microsoft's Xbox. It is the third game in the series, succeeding Star Fox 64, and the first game in the series to feature adventure-style gameplay.