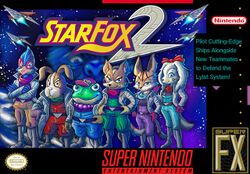 Lylat Wiki has an article about:

Star Fox 2 is the unreleased sequel to the original Star Fox game for the Super Nintendo. For a long time, it was only able to be played because a handful of incomplete cartridges were leaked and subsequently dumped into digital format. The game finally got its first official release on September 29, 2017, as part of the SNES Classic Edition. It was later released on the Nintendo Switch through the Nintendo Switch Online service on December 12, 2019.

In this game Emperor Andross, previously defeated in the first installment of the series, has come back to wage war against planet Corneria. General Pepper calls again upon the Star Fox team for help. The player's mission is to defeat Andross' Army while preventing the fall of Corneria.

The gameplay differs greatly from the original one: instead of a linear series of missions the player is able to roam freely the Lylat System, represented by an interactive map screen. The game map runs in real time whenever the player is moving or engaged in battle: enemy ships fly around, planets are conquered, missiles are fired, etc. When the player's ship makes contact with an enemy, planet or base the game changes to an action perspective for the duration of that encounter. The game ends when Andross' base is destroyed, then the player's performance is rated and scored.